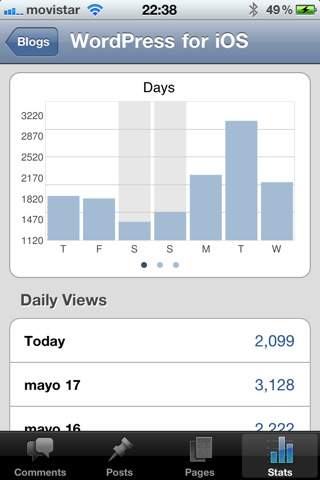 The official WordPress app for iOS, available for iPhone and iPad and often criticized by many (including me) for its proverbial instability and lack of poweruser-oriented features, has been updated earlier today to include a new button to quickly insert a new photo – they call the feature Quick Photo – as well as stats for your WordPress blogs. The new Quick Photo functionality only works on the iPhone for now, and WordPress notes in the 2.8 changelog this may be the last update that supports older systems running iPhone OS 3. Quick Photo is clearly oriented to those users who maintain a photo-centric blog, as it’s meant to let you snap a picture as quickly as possible without even selecting the destination blog first. Stats, on the other hand, are a welcome addition that are enabled by default on WordPress.com blogs, but require the installation of the standalone plugin or Jetpack on self-hosted WordPress.org blogs. The WordPress developers write on the iOS blog:

Finally you’re able to check your blog’s statistics on the go. There are charts for Daily, Weekly, and Monthly page views, swipe over them to see the others. You can also see Daily Views by date, as well as top Post Views, Referrers, Search Terms, and Clicks for the past 7 days.