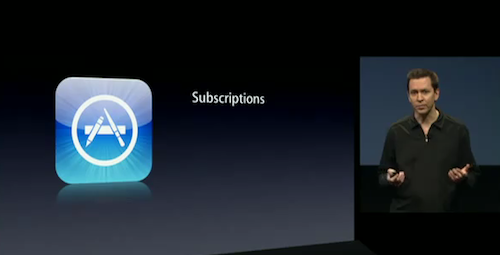 Last night we reported Apple is already working on a new build of iOS that should be coming as early as mid-December to support plans for recurring subscriptions in App Store apps. The first app to take advantage of these new options? The Daily by News Corp.

Well, at least that’s what the rumors say, and of course we won’t be hearing anything official from Apple until the day the collaboration with News Corp. goes public. But plans for recurring subscriptions have been going around for a while at Cupertino, although they didn’t play out the way we wanted. Or perhaps Jobs and Forstall wanted. As a matter of fact, yesterday I remembered Forstall had mentioned “subscriptions” as a new business model for developers in iPhone OS 3.0. At the iPhone OS 3.0 preview event in March 2009, he clearly stated that many developers (especially magazine app publishers) were asking for a way to renew subscriptions in-app. So what did those publishers get? Recurring subscriptions? No, they got in-app purchases, which are far from being a way to automatically renew a subscription.

So we took the part from the preview event video where Scott Forstall mentions subscriptions and re-uploaded it. Looking back, it’s not clear whether Apple really saw in-app purchases as a way to automatically renew magazine subscriptions in-app or not. Maybe they wanted recurring subscriptions to be part of the in-app purchase system but they had to remove them from the final version of iPhone OS 3.0. I mean, blogs back then really seemed to think subscriptions were a go. Thing is, Apple hasn’t changed its position since then (not even when the iPad came out) and we think it’s about time to have a proper system for recurring subscriptions tied to iTunes accounts.