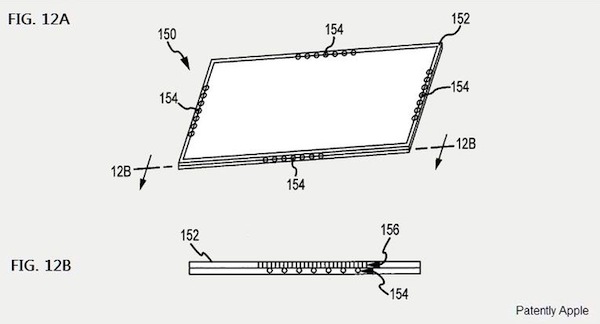 Two patents uncovered today by AppleInsider and Patently Apple give us some insight on technologies and features Apple might implement in future MacBooks and iOS devices. Smart bezels (a subject we’ve covered before) make a comeback today in a patent that describes how tablets could benefit from losing physical buttons and delegating functions like volume and brightness adjustment to touch-sensitive hardware parts running around the screen of a device.

First off, batteries. As reported by AppleInsider, Apple is looking into ways to extend the battery life of rechargeable lithium cells without actually increasing the size of the battery. This could allow to put highly durable lithium-based cells into mobile devices without sacrificing space and overall weight of the unit.

The CC-CV charging technique would allow the thickness of the anode active material inside a battery cell to be increased in both “volumetric and gravimetric energy density.” But while the density of the power capacity would be increased, the size of the battery, as well as its maximum charging time and minimum life cycle, would remain unchanged.

As far as battery-related patents go, in the past months we saw Apple playing around with the idea of fuel cell casing, an electrochemical battery that uses hydrogen to generate electricity.

Intriguing speculation comes from Patently Apple as well, which – again – has dug up information on “smart bezels”, a technology that would let users control apps, volume and brightness settings of an iPad without the Home button. Indeed, we’ve heard about the possibility of future iPads and iPhones lacking the aforementioned button, too. But unlike previous rumors that pointed to multitouch gestures as a way to operate iOS devices, this patent (like others before it) indicates how bezels could become touch-sensitive through a series of sensors and haptic actuators.

In other embodiments, the volume may be adjusted by determining a movement upward or downward on the surface and adjusting the volume accordingly, i.e., adjusting up for a sensed upward movement.

Patently Apple’s report goes really in-depth (MacBooks, too) and we suggest you go check it out here. Personally, I believe we’re still a long away off losing the Home button on our iPhones and iPads, but I’m firmly convinced someday we will control several functions (like volume and brightness, or multitasking) through bezels, smart enough to recognize whether we’re holding a device or applying pressure to do something else. With all these patents surfaced in the past months, it seems pretty clear that Apple’s betting on this feature.