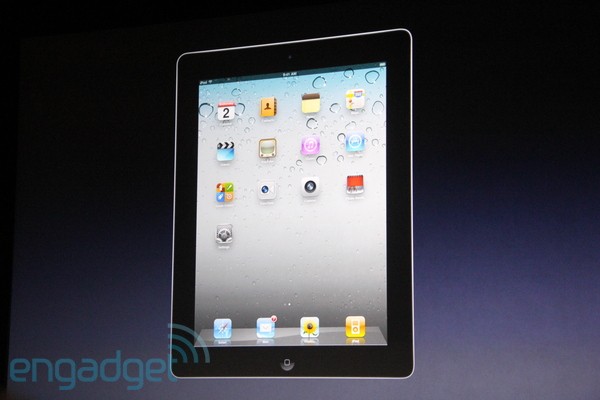 iPad 2 is 33% thinner than the original one, 3.4mm to 8.8mm. It’s got tapered edges and it’s even thinner than the iPhone 4. It comes in a new white design, it’s got the same 10 hours of battery life. Same prices of iPad 1. Available both in WiFi and 3G versions for AT&T and Verizon.

Pictures courtesy of Engadget. More details below, and look for a detailed roundup of iPad 2 in a few minutes on MacStories. 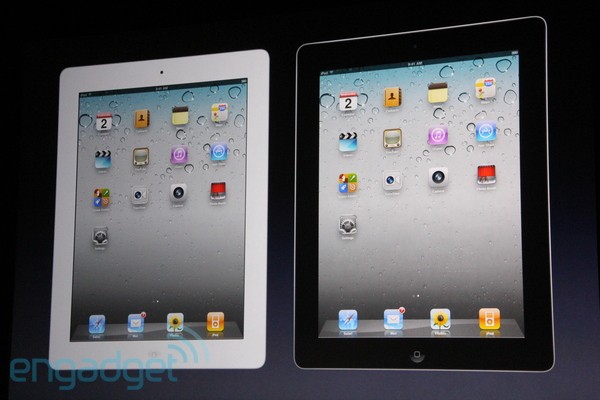 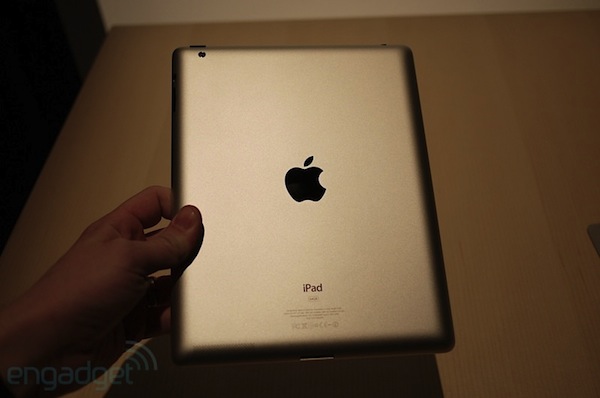 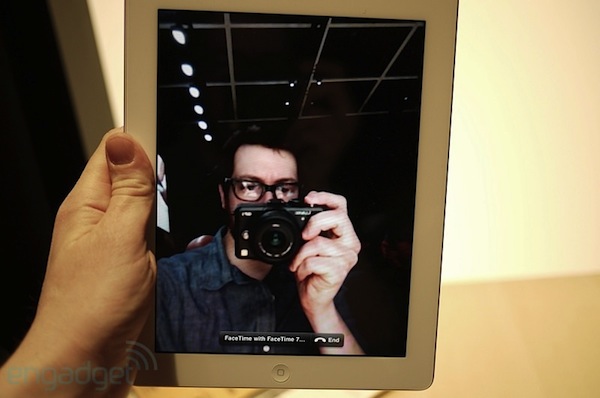 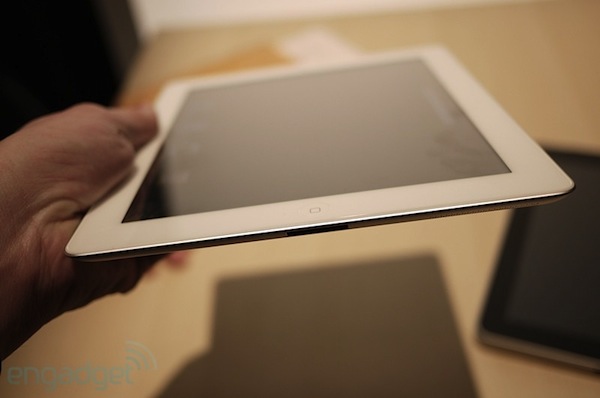 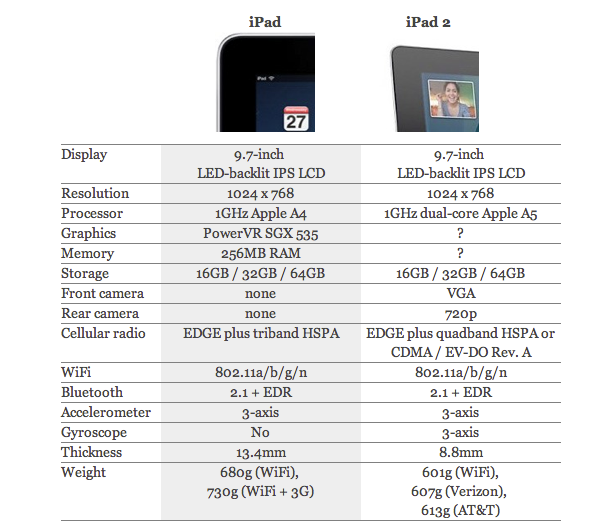 First excerpt of the keynote, courtesy of CNET:

And more hands-on videos! This time, courtesy of AppAdvice.

Another hands-on video from CrunchGear below.

Two more videos, with a rather lengthy one:

SAN FRANCISCO—March 2, 2011—Apple® today introduced iPad™ 2, the next generation of its magical device for browsing the web, reading and sending email, enjoying photos, watching videos, listening to music, playing games, reading ebooks and much more. iPad 2 features an entirely new design that is 33 percent thinner and up to 15 percent lighter than the original iPad, while maintaining the same stunning 9.7-inch LED-backlit LCD screen. iPad 2 features Apple’s new dual-core A5 processor for blazing fast performance and stunning graphics and now includes two cameras, a front-facing VGA camera for FaceTime® and Photo Booth®, and a rear-facing camera that captures 720p HD video, bringing the innovative FaceTime feature to iPad users for the first time. Though it is thinner, lighter, faster and packed with new features, iPad 2 still delivers up to 10 hours of battery life* that users have come to expect. iPad 2 is available in black or white, features models that run on AT&T’s and Verizon’s 3G networks, and introduces the innovative iPad 2 Smart Cover in a range of vibrant polyurethane and rich leather colors.

“With more than 15 million iPads sold, iPad has defined an entirely new category of mobile devices,” said Steve Jobs, Apple’s CEO. “While others have been scrambling to copy the first generation iPad, we’re launching iPad 2, which moves the bar far ahead of the competition and will likely cause them to go back to the drawing boards yet again.”

With the new front and rear cameras, iPad 2 users can now make FaceTime calls to millions of iPhone® 4, iPod touch® and Mac® users so they can see family and friends anywhere there is Wi-Fi. Photo Booth lets you apply fun visual effects, including eight photo special effects like Squeeze, Twirl and Kaleidoscope, to photos captured by either camera.

iPad 2 comes with iOS 4.3, the latest version of the world’s most advanced mobile operating system, with new features including faster Safari® mobile browsing performance; iTunes® Home Sharing; enhancements to AirPlay®;** the choice to use the iPad side switch to either lock the screen rotation or mute audio; and Personal Hotspot to share an iPhone 4 cellular data connection over Wi-Fi.*** Additional iPad 2 features include a built-in gyro for advanced gaming; HSUPA support for enhanced 3G upload speeds on iPad 2 Wi-Fi + 3G on AT&T, and HDMI Video Mirroring that lets users mirror their iPad screen on an HDTV using an optional adaptor.

The innovative new iPad 2 Smart Cover provides protection for the iPad screen while maintaining its thin and lightweight profile. Designed with a unique self-aligning magnetic hinge that makes it easy to attach and remove, the new iPad 2 Smart Cover automatically wakes iPad 2 when it’s opened and puts it to sleep when it’s closed, and has a soft microfiber lining to help keep the screen clean. The Smart Cover also folds into a stand for typing or viewing videos and is available in vibrant polyurethane for $39 or rich leather for $69 in a range of colors, including a (PRODUCT) RED one which helps support the Global Fund to fight HIV/AIDS in Africa.

Apple also introduced two new apps: iMovie® and GarageBand® for iPad, both available on the App Store℠ for just $4.99 each. With iMovie, iPad 2 users can shoot and edit videos right on their iPad and post their movies to YouTube, Facebook, Vimeo and their MobileMe℠ gallery; watch them on their iPod®, iPhone or iPad; as well as view them on their HDTV using AirPlay and Apple TV®. GarageBand turns your iPad into a collection of touch instruments and 8-track recording studio, allowing you to perform with onscreen keyboards, guitars, drums and basses using multi-touch gestures–even if you don’t play a musical instrument.

iPad 2 runs almost all of the over 350,000 apps available on the App Store and there are more than 65,000 native iPad apps available from an incredible range of apps in 20 categories, including games, business, news, sports, health, reference and travel. The iTunes Store gives iPad users access to the world’s most popular online music, TV and movie store with a catalog of over 14 million songs, over 50,000 TV episodes and over 10,000 films including over 3,500 in stunning high definition video. The iBooks® app for iPad includes Apple’s iBookstore℠, the best way to browse, buy and read books on a mobile device.

Apple designs Macs, the best personal computers in the world, along with OS X, iLife, iWork, and professional software. Apple leads the digital music revolution with its iPods and iTunes online store. Apple is reinventing the mobile phone with its revolutionary iPhone and App Store, and