Even if I suggested waiting before trying to jailbreak your iPad running iOS 4.2.1 using redsn0w, I decided to go ahead to report back for all those who might be on the edge and don’t know if jailbreaking iOS 4.2.1 on the tablet is worth yet.

So is it worth it? If you depend on a very few tweaks and apps, the ones that are working right now, you can go ahead and jailbreak the iPad. The biggest obstacle, of course, is that this is a tethered jailbreak, meaning that every time the iPad will need a reboot or its battery will die, you’ll need to boot it into a jailbroken state using redsn0w from your computer. Sure, you can also boot in “normal mode” without resdn0w, but Safari and Cydia won’t work. The tweaks and apps you installed from Cydia won’t work, either.

With this is mind, I took a look at the current state of jailbreak on iOS 4.2.1 for iPad. 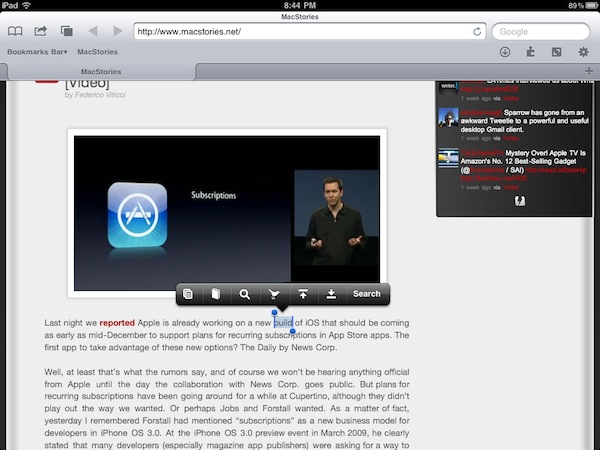 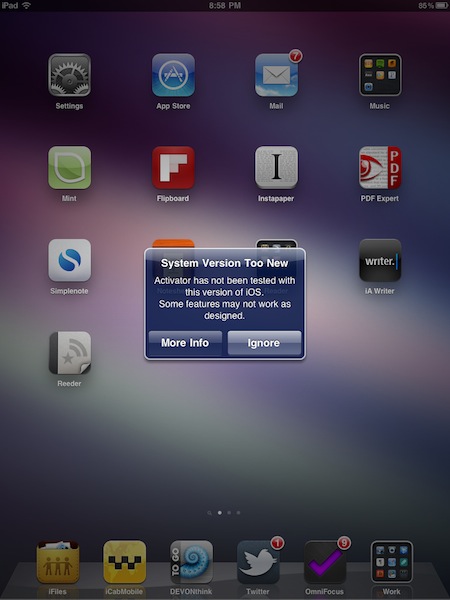 First, the good news: MobileSubstrate and Activator are working, which means most tweaks and apps based on them should work as well. I say “should” because, well, the bad news is that most of them haven’t been updated yet for the new OS, and a very few of them are compatible “out of the box”. Activator is working, but every time you boot / respring the iPad you’ll be presented a weird error message telling you that the OS is too new. It works, but like I said it hasn’t been updated for iOS 4.2.1. Thus there may be some incompatibilities here and there, and some bugs that still need to be squashed. For instance, the Settings app started crashing randomly since I installed Activator.

Fortunately, tweaks like SBSettings and ActionMenu (based on Activator and MobileSubstrate, respectively) are working great on iOS 4.2.1 for iPad. I’ve also been able to activate the icon view for ActionMenu and themes for SBSettings (I use Serious SBSettings HD from Cydia). Respring with SBSettings works fine, so does the “free memory” functionality that allows you to free up RAM being used by inactive apps. Overall, it’s all good from the SBSettings and ActionMenu standpoint, which are two of the most popular tweaks available in Cydia. (ActionMenu Plus Pack works, too) 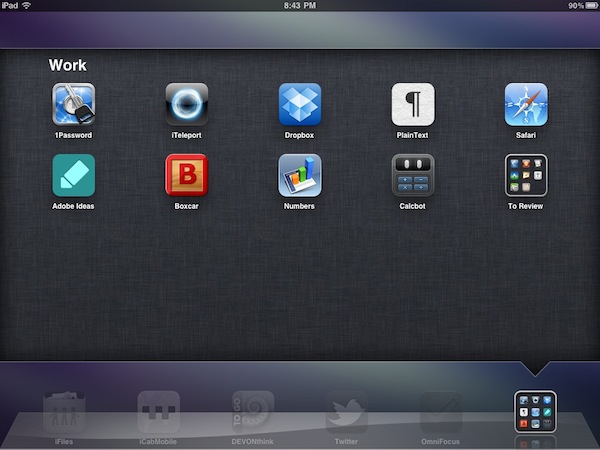 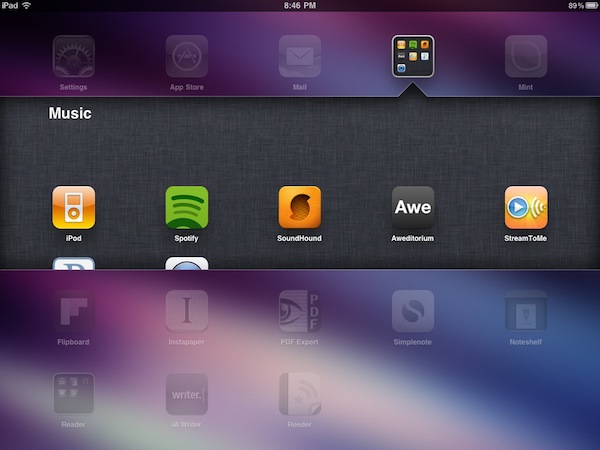 Things get a little bit trickier when it comes to folder management and tweaking. FolderEnhancer has been updated for iOS 4.2.1 but it still doesn’t work on the iPad (you can install it, but it hasn’t been updated for the larger screen), so I went ahead and installed FoldersinFolders. FiF doesn’t come with all the features of FolderEnhancer (such as faster folder opening times and custom background) but at least it lets you put folders inside folders, which is what I was looking for. It works, but it looks weird. Animations haven’t been updated for the iPad, and it’ll make your folders load a little slower than before. Still, the main feature is compatible with the iPad and iOS 4.2.1. Same applies for Infinifolders: it works out of the box, but it needs an update to be fully iPad-ready. For example, there’s a bug that won’t let you move icons around in folders once in wiggle mode. Bugs aside, you can put how many apps as you wish in a folder, and everything works perfectly combined with FolderCloser and FoldersinFolders. FolderCloser, though, doesn’t play nice with sub-folders created via FiF. 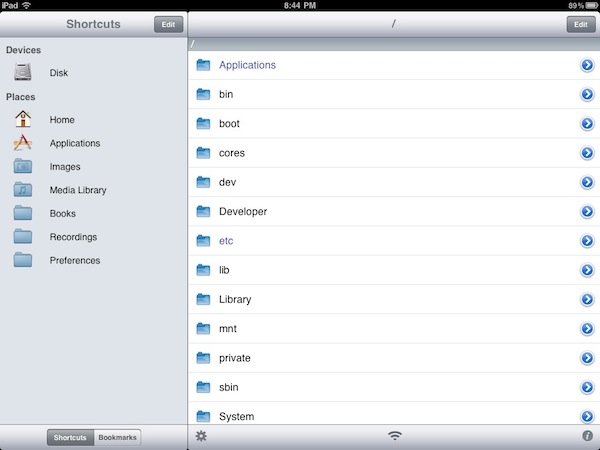 What’s working perfectly is iFile: such a great file manager, compatible out of the box with the iPad and iOS 4.2.1. Highly recommended. 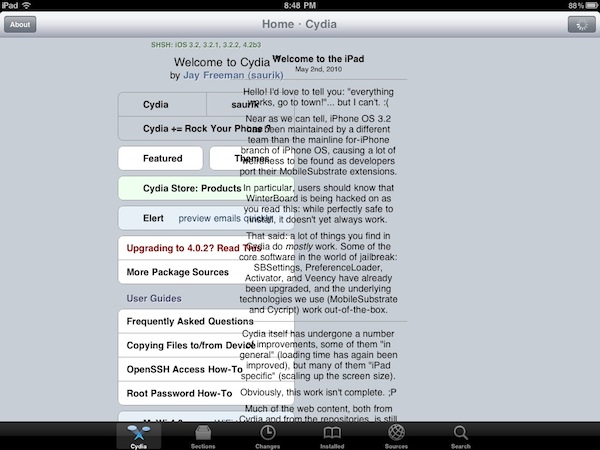 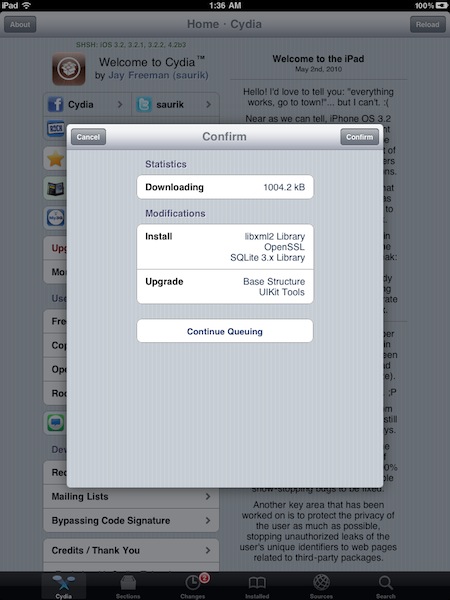 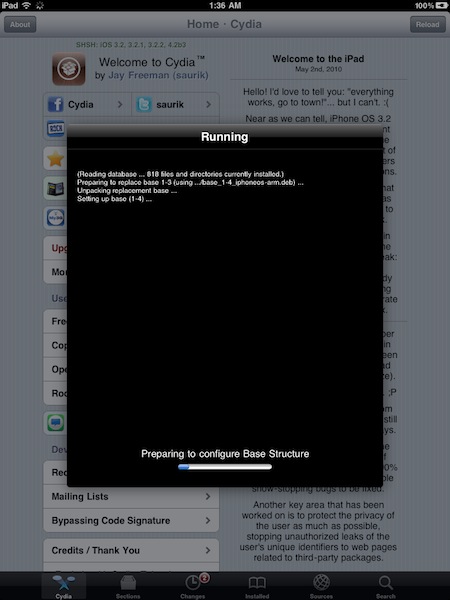 Last, Cydia. Even though it’s been updated to look more native on the iPad (it now comes with modal windows and a landscape mode), I had problems trying to get the landscape view to work. As you can see in the screenshot, looks like there are some issues to fix. I also had problems with the Queue functionality, although I really appreciate the possibility to add items to the queue without having to tap on Cancel.

Other apps that are working on iOS 4.2.1 for iPad are listed below. To sum up, yes – some great apps and tweaks are working. Most of them need an update, and I believe lots of new hacks are coming soon, especially to Safari and the multitasking bar.

As usual, we play the waiting game. If you want to ahead though, you may find something that’s incredibly useful for you already working. Your call.