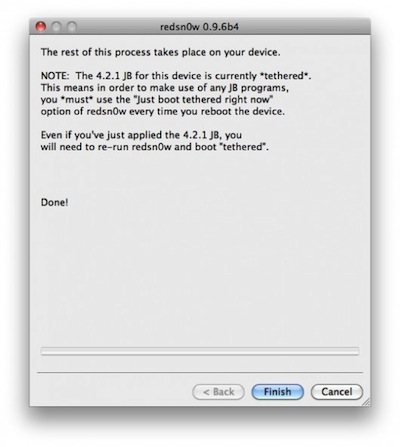 A few hours ago the Dev Team released a public version of redsn0w (version 0.9.6b4) which can jailbreak iOS 4.2.1 on all devices and install a working Cydia, also on the iPad. As we wrote last night, though, this one’s a first jailbreak for iOS 4.2.1, and it’s a tethered one.

This means that unless you have an older device (iPhone3G, older iPhone3GS, and non-MC iPod touch 2G) you’ll be forced to manually boot in a “jailbroken state” on every device reboot using redsn0w on your computer. And considering that many jailbreak tweaks force you to reboot your device, you can guess a tethered jailbreak it’s a real pain to deal with.

To sum up, here’s the list of devices and different boot methods:

Developer chpwn himself (well known in the Cydia development scene) suggests waiting for “the upcoming correct jailbreak” which by the way will also need you to restore your device. From a quick search on Twitter and basing on the reader emails we got last night, it looks like Cydia is working on the iPad – but a very few tweaks and apps have been updated to work properly on iOS 4.2.1. Another reason why you should wait for the “real thing”, the untethered jailbreak.

If you, however, want to go ahead and jailbreak, just go download redsn0w and follow the instructions. You’re welcome to report back in the comments about the Cydia apps working correctly on iOS 4.2.1.