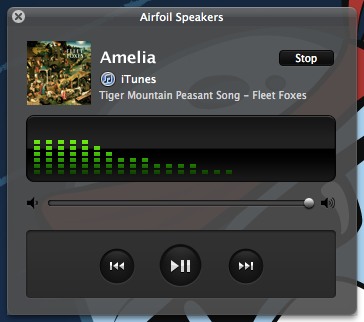 Those who have been looking for ways to control the Spotify application for Mac using third-party utilities, keyboard shortcuts and desktop music controllers will soon be able to do just that thanks to Spotify’s latest update on OS X. Upgraded to version 0.5.1 (version 0.5 brought a new UI as well as iPod sync and improved store experience), Spotify for Mac now comes with basic AppleScript support, meaning playback can be controlled externally without using the official app.

A new version of the Spotify client is out, version 0.5.1. On the Mac, this version contains a basic AppleScript dictionary for getting the current track and controlling playback. You will be auto-updated to version 0.5.1 of the client over the coming days, but you can download the update manually from www.spotify.com/download if you can’t wait.

This is an experimental feature at the moment, which means it may change or disappear in a future version depending on how feedback on the feature goes.

For those users who don’t want to manually fiddle with AppleScript and writing code, this also means other developers will take care of updating their apps to include Spotify integration. The first three big names posted on the Spotify blog are exactly what I’ve been personally looking forward to: Bowtie, the Iconfactory’s Take Five for Mac and Rogue Amoeba’s Airfoil will soon support Spotify playback and (hopefully) album artwork display. Take Five (our review) and Airfoil (our review) are the two apps I’ll make sure to test right away as they enable Spotify controls, considering how much I use them on a daily basis to un-pause music from iTunes and send audio around the house from any Mac app.

On a side note, a few weeks ago the Spotify team also said on the company’s Twitter account that they’re actively developing an iPad app, which should be available soon.