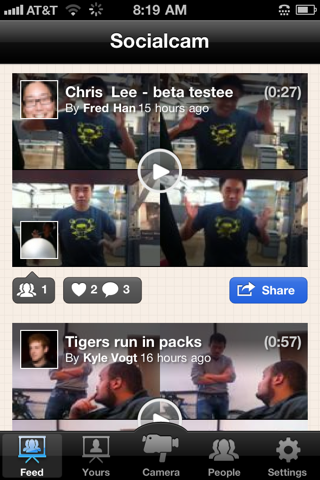 There is no doubt  Instagram has changed the way iOS users look at image sharing on their iPhones: with a few taps, you can take a picture with your device, apply some filters to make it “cooler”, send it to the Instagram’s cloud to share it with your friends and everyone else. Instagram’s appeal lies in the simplicity of the concept, and 2 million users in a few months can’t be wrong.

But the App Store image sharing scene isn’t just about Instagram. Service picplz has collected a pretty huge userbase lately as well, making it the direct competitor to Instagram and one of the most popular apps to quickly share photos from an iPhone. Videos, however, have always been one kind of a problem for iOS aficionados: put simply, there is no easy way to share a video with your friends. Email is slow with attachments, Facebook’s video uploading isn’t intuitive at all (and again, uploading is slow), Youtube is more meant for videos that need to be viewed publicly.

TechCrunch offers a preview of Socialcam, a new iPhone app from the creators of Justin.tv that, like Instagram, will allow users to upload videos with a few taps and share them with their friends using Facebook’s Connect feature. Socialcam, currently in beta and launching in the first weeks of March, has a tabbed interface with a huge “Camera” button in the middle similar to Instagram’s UI and will let you upload, browse videos shared by others, like and comment them.

The app, which will be available for both Android and iPhone, is pretty simple: after firing it up you’re asked to log-in via Facebook Connect, which is currently the only login option. The app presents you with a list of your Facebook friends who are already on Socialcam and asks if you’d like to ‘Follow’ them (Socialcam uses a one-way follower model like Twitter). After that, you’ll spend most of your time looking at the stream of Socialcam videos posted by your friends. Each video is represented by four frame grabs — tapping on one will cause the video player to pop open the clip will start playing immediately. You can leave comments and ‘Like’ each video, and you can also tag your friends in clips. If you tag a friend who isn’t on Socialcam, it will still show up on their Facebook wall (and the video is playable directly from there — you don’t have to click a link).

You can sign up to be notified about Socialcam news here, and hopefully more details will be available in the coming weeks ahead of the app’s launch.