Before introducing the iPhone 5c and the iPhone 5s, Apple did its best to reiterate that iOS is capable of doing actual work, highlighting the iWork suite of apps such as Keynote, Numbers, and Pages, while also touching on iMovie and iPhoto. Apple will be making these apps free on the App Store after September 1st for qualifying iOS devices, which includes the latest iPod touch, the latest iPads, the iPhone 5c, and the iPhone 5s. At the event, Tim Cook stated that you’d be given the option to download these apps during the device’s initial setup.

Back around to iPhones, the iPhone 4s is now free ($450 off contract), and comes with 8 GB of storage. 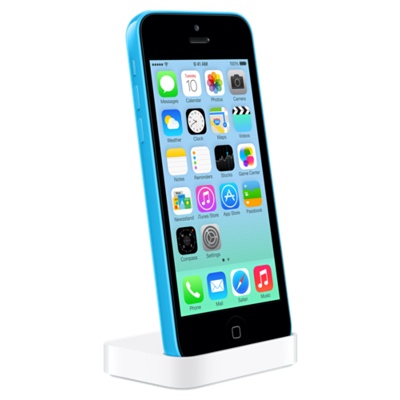 Next there are individual docks for the iPhone 5s and the iPhone 5c (like there are for iPads). Unfortunately, it doesn’t look like Apple will continue making adapters for the Universal Dock. A Lightning cable isn’t included, so you’ll have to use the one that comes with your phone or purchase one separately.  Lastly, these docks can’t be used if you have a case on your iPhone.

There’s now a space gray iPod touch, iPod nano, and iPod shuffle. Looks like all of the previous slate colors are going away.

Lastly there’s the latest updates to AppleCare+. When your purchase a new iPhone, you’re given one year of hardware repair coverage with the included limited warranty, and 90 days of phone support. For $99, AppleCare+ extends the repair coverage and phone support to two years, while also setting a flat rate for accidental repair. Accidental repair covers things like dropping your phone on the ground and cracking the glass, or exposing it to liquids. Previously $49, the new accidental repair rates are $79, and will cover two incidents during those two years. AppleCare+ must be purchased within 30 days of a new iPhone purchase.

Update 6:00 pm: Macworld notes that AppleCare+ is also now available for the iPod touch, with coverage costing $59 and the repair fee costing $29. In an additional tidbit, the iPhone’s plan does not include headphones, whereas the iPod touch’s does.

AppleCare+ is also now available in three more countries: France, Italy, and the United Kingdom. The service costs €99 in greater Europe, and £79 in the UK.

And yes, iPhone 4s, iPhone 5c, and iPhone 5s all have lowercase letters.