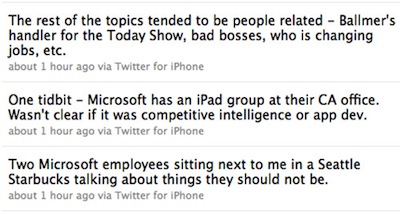 Microsoft is currently distributing 4 apps in Apple’s App Store: Bing, Wonderwall, Windows Live Messenger and Tag Reader. Plus, Office for Mac 2011 came out last week with much anticipation. According to a tidbit by iPhoneDevCamp founder Raven Zachary, Microsoft has a “dedicated” iPad team in one of its offices in California.

As Electronista also speculates, it’s not clear whether the Microsoft employees Zachary heard talking at a bar (oh, these bars in California) were referring to a development group for iPad or a product team focused on building a Microsoft alternative to the iPad. The former option is more likely, as we heard rumors of Microsoft developing software for Apple’s tablet before and, frankly, I think an iPad version of Office would sell like hotcakes. With Apple growing strong in Enterprise, a full-featured version of Office 2011 for iPad would be huge.

Competitive intelligence as described by Zachary is also possible as Microsoft has already been holding focus groups and has been publicly very conscious of Apple’s effect. Despite claiming no impact on notebook sales, executives have been promising numerous iPad challengers based on Windows for the end of the year and early into next. Microsoft has been keen to tout its more than eight years of collaborating on Windows tablet launches, but the iPad has already outstripped Windows tablet sales by a wide margin in roughly half a year.

Of course Microsoft is also looking forward to studying the iPad’s impact on the industry. But in the short term (remember? they entered the “new smartphone market” this year with Windows Phone 7) they might as well just release applications for the iPad. At least we hope so.