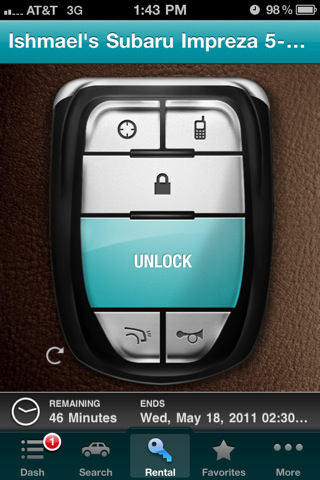 Getaround, a peer-to-peer car rental marketplace that allows you to rent a car in your neighborhood from “real people”, is launching publicly today with an iPhone app available in the App Store for free. Just like popular service AirBnB allows you to find places to stay using an app on your iPhone, Getaround lets you rent cars by day or week from actual people who are also using the service, and not car rental services that force you to pick up a car in a single location. By integrating with Google Maps and thanks to full backing from a car insurance company, Getaround lets you immediately see on your phone which cars are available and where, who’s renting them and for how long / at which rate they’re available. Furthermore, the company has also started shipping the Getaround CarKit, a device that once installed on a car will allow to unlock it without a key, only using your iPhone and a virtual “key” interface that also shows the name of the person that has agreed to share his car.

This idea of renting cars using mobile apps and web interfaces is nothing new, but Getaround’s implementation looks impressive: not only they’re building a community to help you discover people that might share your common interests, Getaround actually helps you get a car with full insurance and a kit that doesn’t need any key in your pockets. For those who decide to share their car (Getaround says most cars in the US stay sit idle for 22 hours a day on average), this service will help them earn some dollars each month, and even “review and rate” the person who took their car thanks to a full-featured community website.

Getaround gives people more choices, going far beyond traditional rentals to provide more local and affordable alternatives. We’ve also found that our members like the “community building” aspect, where Getaround connects them with people who share similar values and interests. As an added benefit, we help people protect the environment by sharing resources, taking unneeded cars off the road and reducing traffic and auto emissions through better planning.

Users can sign up to Getaround for free, and the whole service is completely free to use unless you consider the 40% commission they’re taking off a successful rental. Getaround is rolling out today in the US starting with San Francisco, San Diego and other cities where “the most demand is”, though they have already announced they obviously plan to move outside the US in the future and offer mobile apps on other platforms.