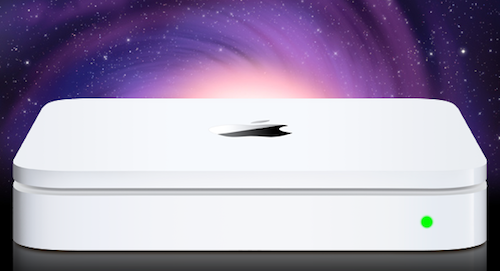 Following the variety of reports from the past weeks that claimed Apple would announce new Time Capsule and AirPort Extreme models at WWDC, an AirPort Utility update was released last night for Mac and Windows, bringing minor fixes to desktop users. AirPort Utility is Apple’s management software to configure and set up an AirPort base station or Time Capsule. Hidden in the update, however, there were some code strings spotted by MacRumors forum members that are hinting at 3rd generation Time Capsules and AirPort Extremes with a software update caching system. This was previously reported as a new feature of these products that would allow a Time Capsule (or AirPort Extreme) to download software updates in the background, cache them, and send them to computers and devices in seconds without the user waiting for the entire download process.

“bsUP.description” = “Apple software updates that are copied to this %@ are available to anyone using this network.”;

In the weeks leading up to WWDC, several rumors suggested the new Time Capsule (Apple’s flagship router solution with integrated Time Machine capabilities) would be a complete redesign running a custom version of iOS through an A5 chip. Others also claimed Apple had implemented a way to store iCloud media on the Time Capsule (or hard drive attached to an AirPort Extreme) so iOS devices on the same local network wouldn’t have to download or stream content every time. As Apple didn’t announce any streaming feature for iCloud, however, it’s unlikely the Time Capsule would be capable of caching content downloadable from iTunes otherwise. The possibility of a caching system was also suggested by Daring Fireball’s John Gruber, who hinted at iOS software update without tethering to a computer. iOS 5 does have OTA updates built into the Settings app, so the Time Capsule would serve as a caching mechanism to download updates in the background, allowing users to close the Settings app and receive the update when it’s already been downloaded.