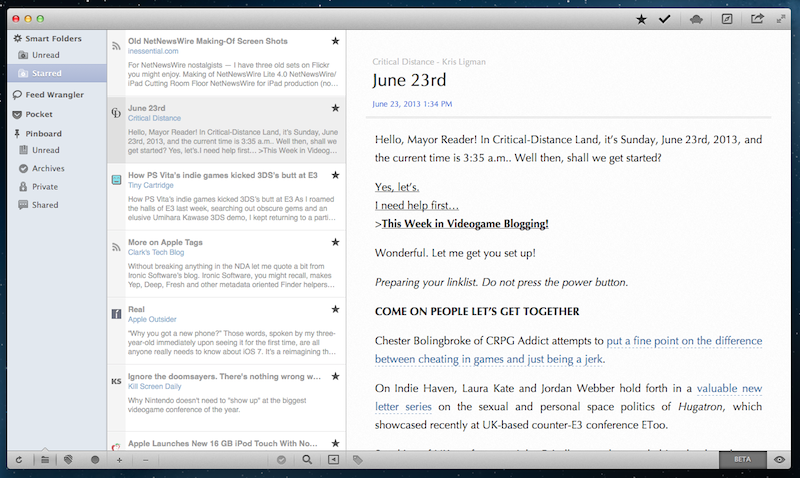 As I noted yesterday with Mr. Reader’s update, the upcoming shutdown of Google Reader has resulted in a fast uptake of third-party RSS services by existing clients for iOS and OS X, leading to a more variegate, rich ecosystem of apps that sync to different web services that aim at replacing Google Reader. Among the new contenders for the RSS throne there’s David Smith’s Feed Wrangler, which has become my favorite alternative to Google Reader and that, after Mr. Reader and the upcoming Reeder for iPhone update, is now supported by Slow Feeds and ReadKit.

I first looked at ReadKit in January (when the app was primarily targeting the market of “read later” desktop apps), and then we mentioned the 2.0 version, which added support for built-in RSS, Fever, and powerful smart folders to create your own stream of news with specific criteria and native OS X notifications. Today, ReadKit 2.1 adds integration with Feedbin and Feed Wrangler; I have been testing the app with my Feed Wrangler account and I’m now using it as my only desktop client for the service, as it has fully replaced the browser tab that I used to keep open in Google Chrome to check on my feeds every few minutes.

Using Feed Wrangler with ReadKit doesn’t change the workflow that the developers introduced in version 2.0: once added from the Preferences, your Feed Wrangler account will be listed in the app’s sidebar (alongside other configured services) with Smart Streams and a button to toggle all or unread items. Smart Streams can’t be edited from ReadKit, but you can add new subscriptions from the File menu; refresh times can be tweaked in the Settings, and the app retains the same reading and sharing options that we outlined in previous versions.

One thing I don’t like about Feed Wrangler support in ReadKit is that, unlike Pinboard and Pocket, there are no sidebar sections for Unread and Favorites, but only for subscriptions and Smart Streams. Fortunately, thanks to ReadKit’s smart folders, you can easily remedy this omission by creating two ad hoc filters that mimic the kind of functionality you’d have in any other feed reader: 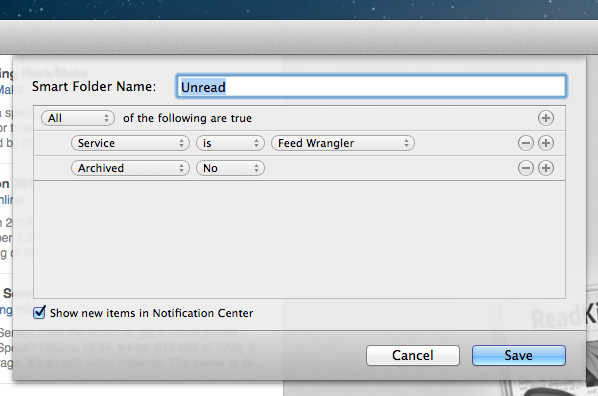 I would like to see proper sections for Unread and Favorites; a positive consequence of having to create dedicated smart folders for this purpose is that you’ll receive notifications for every new unread item that appears in Feed Wrangler through ReadKit. In my tests, ReadKit’s Feed Wrangler sync seemed just as fast as Mr. Reader’s, which means it could be faster and I’m hoping David Smith will soon speed up the API’s backend. ReadKit was already a great app with its read later and Pinboard features; today, if you use Feed Wrangler and have been looking for a desktop client, ReadKit is your best option at $4.99 on the Mac App Store. I’m looking forward to additional power-user features such as sharing services and more keyboard shortcuts, though. 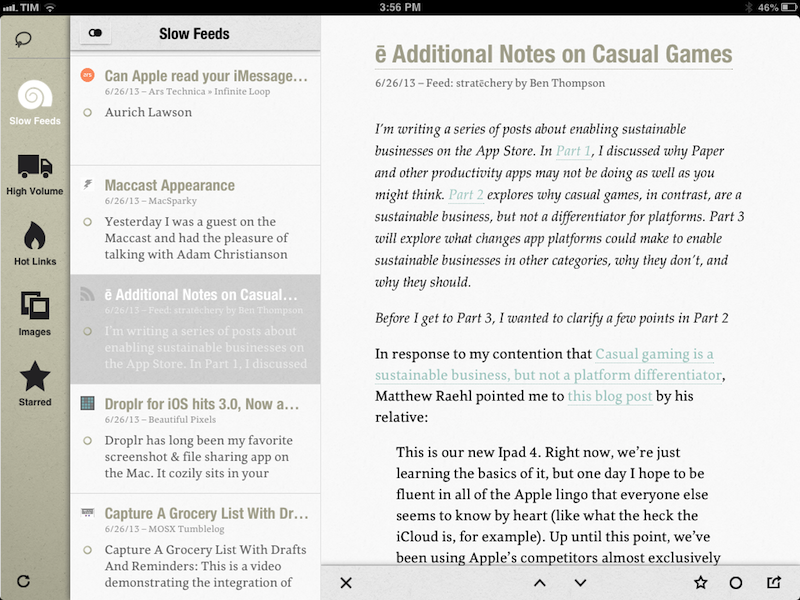 I first reviewed Slow Feeds in May 2012, and the app has been slowly gaining solid new features up to version 3.0, which added Feedbin, FeedHQ, and Newsblur as RSS providers. For those who missed my initial coverage, Slow Feeds is unique in that rather than focusing on the latest unread items in your account, it tries to analyze feeds and display the “slowest” ones – articles from blogs that don’t publish very often, and that can easily get lost if you’re subscribed to hundreds of sources.

Slow Feeds by Stefan Pauwels is an iPhone app that does one thing well: it separates “slow” from high-volume feeds, and it lets you check out both within a single interface. It fixes a simple problem with a unique, yet totally obvious approach: it understands the convenience of RSS for either “low” and “high” volume websites, and doesn’t treat them equally.

With version 2.0, Slow Feeds got a Fever-inspired “Hot” section for popular links:

Hot Links doesn’t look at “slow” or “high volume” blogs, it simply collects links that are the most discussed and “linked-to” in your account. Just like Fever, only for Google Reader (and with less features: there are no “kindlings” or “sparks”). It is a natural evolution of what Slow Feeds already did; now the app comes with four different browsing options: Slow Feeds, High Volume, Hot Links, and Starred. With just one app, I can catch up on the different kind of RSS feeds I want to receive every day.

Slow Feeds 3.1 builds upon the major 3.0 update and keeps the same interface and sharing options introduced in Slow Feeds 2.0. Feed Wrangler sync/feed analysis was just a bit slower than the old Google Reader sync, but it wasn’t a deal-breaker for me. Hot Links were accurate in how they picked the most linked-to URLs, and High Volume feeds still provide a quick way to see a full stream of blogs with lots of new entries every day. Sharing options include Chrome, Pocket, and Pinboard, and I wish the developer would consider more third-party app actions such as Drafts, Pushpin, and Tweetbot.

Slow Feeds is available at $2.99 on the App Store, and it’s Universal.