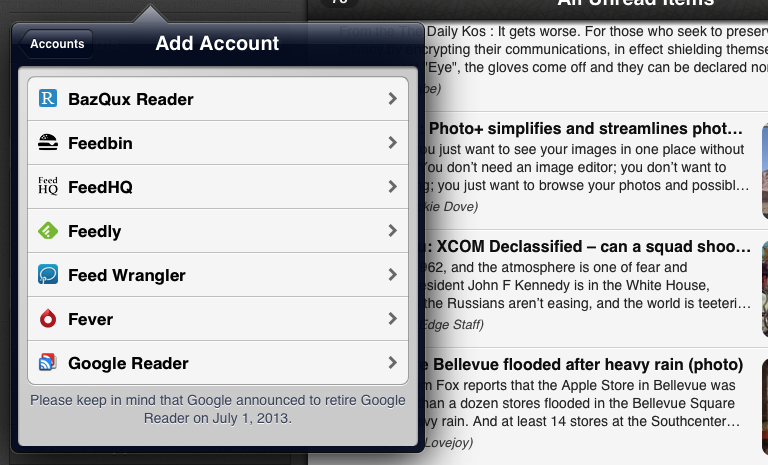 With Google Reader shutting down in less than a week, developers of RSS clients for iOS and OS X are rushing to get updates approved by Apple and let App Store customers continue using their apps with other RSS services. In the past two weeks, details have emerged on a variety of new RSS platforms that are launching on the brink of Reader’s demise, such as Feedly, Digg Reader, and AOL Reader; I’ve already covered Feed Wrangler, the service I’m currently using, and Reeder’s update with support for Feedbin. It’s not clear if one service will stand out as a “winner” in a post-Google Reader world; for now, what’s apparent is that most third-party developers are deciding to support various Google Reader alternatives rather than picking a single service (as it happened with Google Reader in the past three years). Today, my favorite Google Reader app for iPad, Mr. Reader, has been updated to support six new RSS services, with a version 2.0 that doesn’t add new sharing or reading functionalities, but that ensures the app will continue working after July 1.

Mr. Reader 2.0 supports BazQux Reader, Feedbin, FeedHQ, Feedly, Feed Wrangler and Fever as Google Reader replacements[1]. The app doesn’t come with integrated signup options – it assumes you’ve already backed up your data using Google Takeout and started using one of the aforementioned services. The account management popover, already available in the top left corner of the app in previous versions, has been enhanced with new login options and a menu to switch between accounts: if you’re trying multiple Google Reader alternatives before choosing one to settle with, you can use Mr. Reader to instantly switch between services. Two nice touches that I noticed during my tests were support for 1Password to quickly find related logins, and how the app can keep separate themes for different services, which provides a handy visual cue for context.

I tested Mr. Reader 2.0 with both Feed Wrangler and Feedly, and the app generally worked fine. Feedly sync was as fast as the old Google Reader sync; Feed Wrangler was slightly slower and I experienced some errors, but I know that Feed Wrangler developer David Smith is adding more capacity to Feed Wrangler’s servers to handle the influx of new users.

As a Feed Wrangler user, I was especially happy to find out Mr. Reader 2.0 supports Smart Streams and the possibility to edit them directly from the iPad. Smart Streams, available in a sidebar on the left side of the screen, allow you to combine site filters and search queries to receive a stream of articles specifically tailored for your needs. For instance, I have a stream that looks for the word “Nintendo” in my Games subscriptions, and another that simply fetches all entries from a subset of feeds; they are, essentially, tags augmented with search filters, and I use them daily. To edit a Smart Stream, you can tap & hold to bring up the Edit menu, then choose a name, a search filter, and whether the stream should include all feeds or only specific ones. I couldn’t find, unfortunately, a way to create new Smart Streams from Mr. Reader.[2] And, because I haven’t tested Mr. Reader with Fever or BazQux, I can’t comment on Mr. Reader’s support for features exclusive to those services.

Mr. Reader 2.0 retains all the great power-user features of version 1.x, such as a configurable Services menu based on a powerful URL scheme, several preferences to customize the behavior of the app, and integration with apps and third-party services. With Google Reader’s tale coming to an end in five days, Mr. Reader’s new version is timely and necessary: there’s no clear, one-size-fits-all Google Reader replacement on the horizon – maybe there will never be one again, and I think that’s a good thing. Mr. Reader 2.0 is available on the App Store.