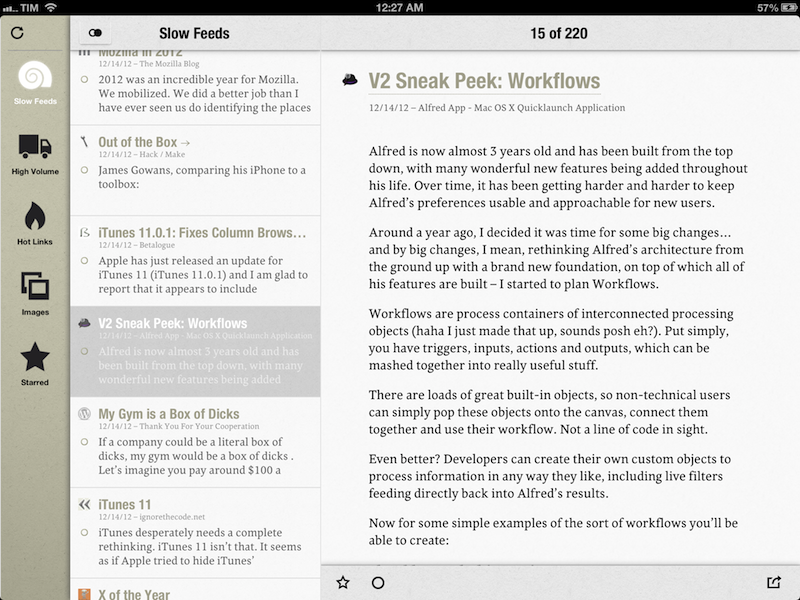 I have been testing Slow Feeds 2.0, a major update to Slow Feeds released today that adds new features and an iPad version. For those who don’t know Slow Feeds, it’s a neat concept: the app analyzes your Google Reader account, and puts “slow feeds” – articles from blogs that don’t post 20 articles per day – in a separate section. From my old review:

Slow Feeds won’t replace your daily RSS app (it doesn’t want to), yet at the same time, I believe it really has a chance of becoming an app many will use alongside their RSS client on a daily basis. Slow Feeds’ core concept is so clever, and so naturally implemented, I am now wondering why, in retrospective, others didn’t come up with it first.

Slow Feeds 2.0 is a solid update. The developer is extremely clear about his main source of inspiration for the new Hot Links section: Shaun Inman’s Fever. Hot Links doesn’t look at “slow” or “high volume” blogs, it simply collects links that are the most discussed and “linked-to” in your account. Just like Fever, only for Google Reader (and with less features: there are no “kindlings” or “sparks”). It is a natural evolution of what Slow Feeds already did; now the app comes with four different browsing options: Slow Feeds, High Volume, Hot Links, and Starred. With just one app, I can catch up on the different kind of RSS feeds I want to receive every day. I only have two minor complaints right now: there’s no way to hide the sidebar/middle panel in landscape mode, so the web view for a Hot Link is too small for most websites (the app uses panels in portrait mode); second, the sites that are linking to a Hot Link should be listed in the app (Sunstroke gets this right for Fever).

Slow Feeds 2.0 also has an Images view that extracts every image from the articles in your feeds, and displays them as a large “photo wall” on screen. Unfortunately, the feature doesn’t have much utility for mea right now, as I don’t want to browse a beautiful wall of app screenshots (a common topic among the blogs I subscribe to). Ideally, Slow Feeds could let me pick a “Photography” folder from my Google Reader – and in that case the Images view would come in handy.

Make sure to read more about Slow Feeds’ original concept in my review of version 1.o. Slow Feeds 2.0 is a great update the makes the app more useful for my reading workflow, and I’m looking forward to future improvements.