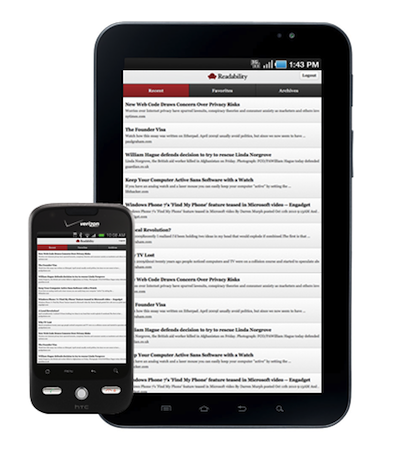 Three weeks ago, web service Readability launched a completely revamped version of its “read later” platform including support for Instapaper (Marco Arment is an advisor to Arc90, the company behind Readability) and a new subscription system that allows publishers of content consumed through Readability to get 70% of the fees paid by subscribers.

It works like this: you sign up to Readability as a reader paying a $5 monthly fee, but you can decide to pay even more if you’re willing to support the project. Once you’re ready to use the service, you install a bookmarklet in your browser that will save articles for later in an uncluttered view that’s perfect for late-night reading sessions and mobile devices. Yes, it really is similar to Marco Arment’s Instapaper. In fact, the developers announced that the first official Readability iOS app would be heavily based on Instapaper – which also happens to have introduced support for sending logs to Readability a few days ago. Instapaper and Readability thus have become two integrated platforms for reading content and sharing it with your friends – but Readability’s unique twist allows publishers (like MacStories, or any other weblog) to get a kickback for every article saved for later. It’s a genius approach no one ever tried before.

Readability announced the iOS app would be available within weeks as soon as Apple would approve it for sale in the App Store. But in the meantime, Apple announced its new policy on subscriptions, which forces developers to implement in-app purchases for content and set up a recurring subscription system even if a similar option is offered elsewhere, like on Readability’s website in this case. The folks at Readability, however, didn’t expect these new rules to apply to a web service that requires a paid subscription – especially considering that Readability doesn’t serve original content but gives you access to a website (a simple login) that aggregates content saved from other sources. Still, the app got rejected because of the lack of the implementation of in-app purchases.

The developers explain on the company’s blog:

Last Friday, you notified us that our Readability iOS application was rejected. In explaining the rejection, you pointed us to 11.2 in the App Store Review Guidelines:

“11.2 Apps utilizing a system other than the In App Purchase API (IAP) to purchase content, functionality, or services in an app will be rejected.”

We’re obviously disappointed by this decision, and surprised by the broad language. By including “functionality, or services,” it’s clear that you intend to pursue any subscription-based apps, not merely those of services serving up content. Readability’s model is unique in that 70% of our service fees go directly to writers and publishers. If we implemented In App purchasing, your 30% cut drastically undermines a key premise of how Readability works.

The problem with this rejection, as also explained by Readability, is that Apple is enforcing subscriptions and in-app purchase for any kind of web service and application. Not just newspapers, magazines and eBook stores – any website that has a subscription. No matter if it generates original content or has a different functionality. If Readability is already giving away 70% of its revenue to publishers and writers, how are they supposed to give that remaining 30% away to Apple as well? It’s a business model that doesn’t make sense, at least until Apple revises its rules on the kinds of services that must implement subscriptions.

This rejection is noteworthy as it’s the first “important” one we’ve heard so far and also because it finally makes it clear that Apple wants a 30% cut on any web service / website / application that has a subscription. Indeed any “content-based” app – like they wrote in the original press release. For now, Readability is sticking with the web and we’re looking forward to their mobile-optimized reading platform.