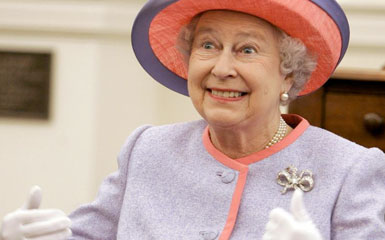 The Queen of England has apparently ordered her staff to buy her an iPad after the newly married Prince Will and his brother Prince Harry showed off theirs to her on a recent gathering at Buckingham Palace.

The Princes, the Queen’s grandsons, gave her a demo of how the iPad worked which, as a royal insider told The Sun, led her to be impressed and “particularly taken with how easy it was to use, the large screen and how light it was” The insider also notes that the Queen is fairly “switched on” for an 85 year old woman, saying “It was only a matter of time before she asked someone to go and get her one.”

“The Queen has a mobile phone as well as the iPods, so an iPad is the logical progression. She thinks it will be great to keep her entertained on all the long trips she has to make.”

The same royal insider says that the Princes think her reaction is hilarious, but also “love the fact that their gran wants an iPad and think she’s really cool”. The iPad won’t be the first Apple product that the Queen owns either, she previously bought a £169 silver iPod in 2005 and was given a new iPod by Barack Obama in 2009, which was loaded up with happy snaps from the Queen’s US visit in 2008.