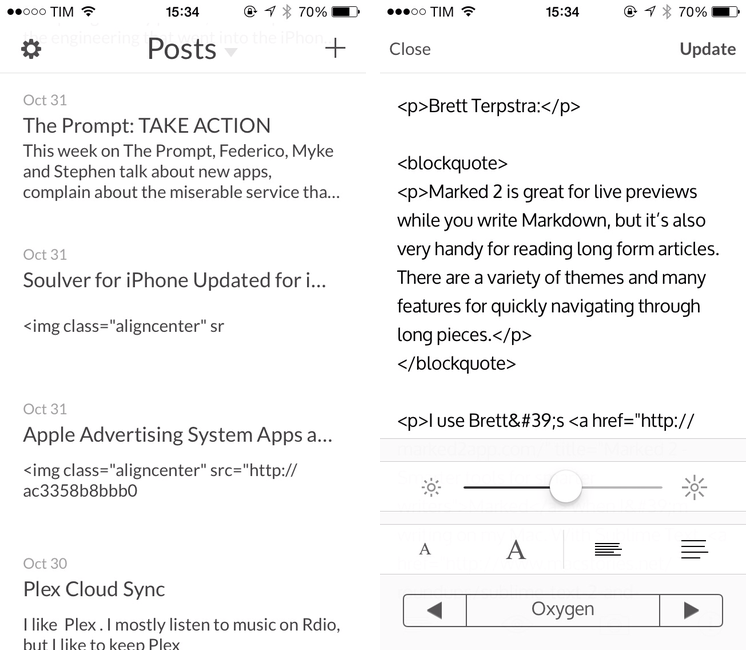 In June, Automattic acquired Poster, a popular WordPress client for iPhone and iPad that featured Dropbox integration, Markdown support, and advanced actions for power users. Poster was, before Editorial, the app that I used to write articles from my iPad and iPhone, and I wasn’t thrilled when developer Tom Witkin announced the app would be discontinued.

To my surprise, the app – which was pulled from the App Store after the acquisition – has been updated to version 3.0 this week, adding iOS 7 compatibility and fixes. There are no new notable additions, but the entire Poster UI has been updated for iOS 7 and there is a new line height option in the preview menu; Witkin got rid of textures and iOS 6-style buttons, adding subtle animations for navigation and other menus. It’s still the same Poster, only with an iOS 7 interface and less crashes.

However, the bad news is that, because the app isn’t available on the App Store anymore, only old customers can download the updated version. If you bought Poster in the past, open the App Store, find the Purchased section, and look for Poster; tap Open/Download, and the app should be reinstalled with the new version 3.0 that Witkin made for iOS 7.

Witkin figured out a way to update Poster for old customers who don’t want to switch to the official WordPress client, and I’m glad he did because some of Poster’s more advanced functionalities are still nowhere to be seen in WordPress for iOS or other text editors. I don’t know if Witkin will keep on releasing compatibility updates in this way, and, unless major changes are made, Poster will eventually stop working with future versions of iOS or WordPress – but until that day, you can enjoy Poster 3 for iOS 7. It’s still a great app.