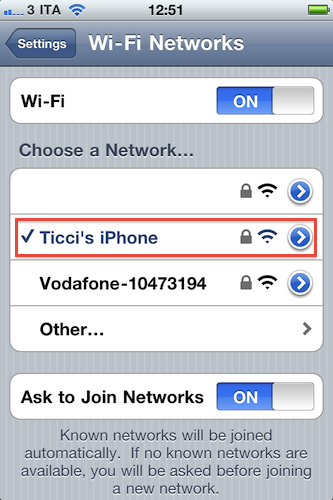 Here’s an interesting feature we didn’t know had been implemented on iOS 4.3 that has been brought to our attention this morning by German blog Macerkopf.de [Google Translation]: on the iOS 4.3 GM (released last night) you can start Personal Hotspot and let a second iPhone connect to use FaceTime over 3G.

I’ve tested this with my two iPhone 4s and a Mac running FaceTime, and it works. With the first iPhone, I made sure I had 3G active and created a WiFi network with Personal Hotspot. With the second iPhone 4, I connected to Personal Hotspot and called my Mac using FaceTime. It worked the other way around as well. Video quality and sound weren’t excellent (like I said, it’s a 3G connection) but definitely acceptable.

This is an interesting little detail because Apple doesn’t want you to use FaceTime over 3G. A number of Cydia tweaks surfaced in the past to overcome Apple’s restrictions, like Facebreak and My3G. But if you happen to have two iPhones (say, your wife’s) and you really need to use FaceTime on the go to call someone, Personal Hotspot will let you do that. Even if it’s actually a 3G connection, it appears that as long as the iPhone “sees” the network as a WiFi one, it’s fine. Clearly the second iPhone isn’t able to tell whether the connection comes from 3G or not.

We don’t know if this was possible on the previous betas of iOS 4.3, so if you’re still running one of those and the method works, please let us know in the comments below.