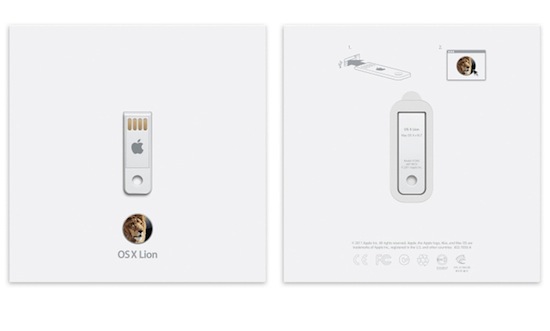 Initially announced on July 20, when OS X Lion was released to the public through the Mac App Store at $29.99, Apple has released the OS X Lion USB Thumb Drive today, allowing customers without a broadband connection – unable to download the 3.49 GB installer from the Store, or willing to keep a physical copy of the OS – to install the latest version of OS X with a USB stick similar to the one Apple shipped with the 2010 MacBook Airs (and didn’t include in the 2011 models, which come with Lion pre-installed but no USB drive in the box).

OS X Lion is available on a USB thumb drive for installation without the need for a broadband Internet connection. Just plug the drive into your USB port and follow the instructions to install. OS X Lion is also available for a lower price as a digital download from the Mac App Store.

As noted by 9to5mac, those who install Lion through the USB Thumb Drive won’t be able to perform re-installs with Lion’s built-in Recovery functionalities, as they will need to use the thumb drive again. The OS X Lion Thumb Drive is shipping in 1-3 business days.

Earlier this month, Apple released a free utility to turn any external drive into a Lion Recovery partition, and a number of unofficial solutions have also surfaced. You can find Apple’s OS X Lion Thumb Drive at $69 in the online store.