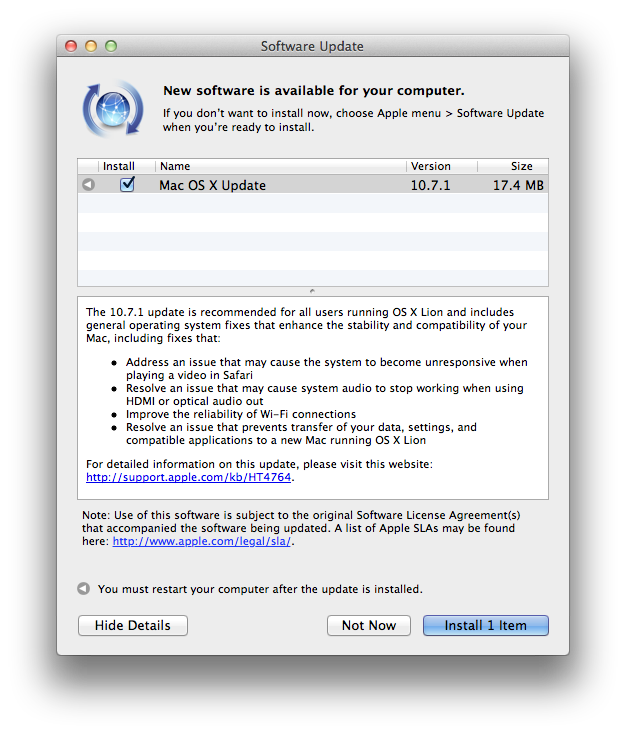 A few minutes ago, Apple released the first update to OS X Lion, which reaches version 10.7.1 and adds a number of fixes to the operating system. These fixes address video unresponsiveness in Safari, WiFi reliability, as well as audio issues with HDMI and migration of old data to a new Lion installation. The update is only 17.4 MB from Software Update, and we’ll post direct links as soon as Apple makes them available. The new version is currently available on Software Update, with the Mac App Store reporting the original OS X 10.7 that was released last month.

The 10.7.1 update is recommended for all users running OS X Lion and includes general operating system fixes that enhance the stability and compatibility of your Mac, including fixes that:

For detailed information on this update, please visit this website: http://support.apple.com/kb/HT4764.

OS X  10.7.1 is the first update to OS X Lion, which was released on the Mac App Store on July 20. Earlier today Apple also released the official OS X Lion Thumb Drive, allowing users without a broadband connection to buy the new OS from Apple as a USB key. Apple is already working on OS X 10.7.2, which has been seeded to developers and will be released this fall to add iCloud compatibility on OS X.

Meanwhile, Apple has posted the following direct links for the MacBook Air and Mac mini 2011: