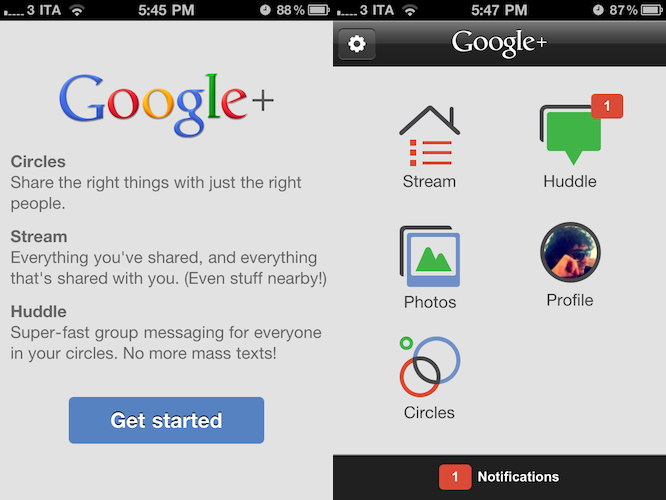 Google has just released the official Google+ app for iPhone on the App Store. The app is free and available here, and at the moment of writing this Google hasn’t updated its Mobile webpage to showcase the new app yet.

The Google+ iOS app provides a native interface to access much of the functionalities of the website, such as the Huddle group messaging feature – which was exclusive to Android devices prior to the app’s approval. The dashboard of the Google+ app presents a grid of icons to access the Stream, Huddle, Photos, your Profile and Circles, as well as a Notifications tab at the bottom that will open a vertical list of all your incoming notifications. Whilst much of the navigation seems to rely on web views optimized for the iPhone and fetched by the device, the animations when switching between sections are quite snappy and fast on iOS 4. Just like on the desktop, the Stream provides recent updates from the people you follow and your Circles, allowing you to check for new posts with the popular “pull to refresh gesture” and comment or +1 others’s posts. You can’t +1 from the home page – you have to open a single post and hit the + button in the upper right corner, while a text field at the bottom will let you leave a comment. You can also “mute” or “report” a post. The app is capable of sending push notifications for new comments, shares, and so forth.

A nice addition to the native app, as opposed to the iPhone web app we reviewed here, is the possibility of swiping between views from the Stream. A swipe to the right will take you to the Incoming section (where you can see updates from people that have “circled” you), and a swipe left will load posts from people nearby. Indeed the Google+ app makes good use of geolocation features, with a check-in button located in the top toolbar, and extended location options in the New Post screen. I was pleased to see you can load your precise current location, your city (without address), or point of interests. Obviously, you can hide location altogether if you don’t feel like sharing that kind of data. When you compose a new post, you’re also given the option to select the circles you’d like to share something with, and attach photos from the Camera Roll. You can also snap new pictures directly from the Google+ app thanks to the built-in camera button. An icon in the right corner will let you dismiss the keyboard to reveal the aforementioned location, circles, and media tabs.

The Profile, Huddle and Photos sections don’t surprise as far the interface design goes, but it’s nice to see you can upload photos from the Photos tab without having to jump back to the Stream. Huddle looks very simple to use, and it updates in real time. The Huddle compose screen allows you to address a message to a name, email, or circle, and when you add multiple contacts to a conversation you’ll see their profile pics along the top. You can add these members to a circle, mute, leave the huddle, or keep adding members. From our first tests, Huddle on the iPhone does seem like a very intriguing group messaging option that we’ll test in the upcoming weeks.

The Circle interface has been redesigned for the iPhone and streamlined to simplify the process of adding and managing friend lists on the iPhone’s smaller screen. There are no fancy animations as seen on the desktop, but you can still browse by people and circles with two tabs in the top toolbar, create a new circle, and check out “suggested people”. You can see the post and photo stream for individuals or circles, move friends between circles and even block or report profiles. You can search by name or email, or load a circle’s specific stream and start reading and commenting from there.

Overall, the Google+ iPhone app looks like a solid start, but there are some serious loading issues I’ve experienced in the first minutes (again, the app loads a web view inside a native iOS frame, and that doesn’t contribute to the general smoothness of the app) Google will need to fix. It’s also disappointing to see Google didn’t manage to create a native iPad version at launch (especially because the iPad makes for a perfect reading device for some long Google+ posts and comment threads), but it’s likely they’ll get there in the coming weeks. The Google+ app works well on iOS 4 devices, it’s got lots of features already and the Google+ team is open for suggestions and feedback (as usual) given the service launched roughly three weeks ago.

Check out more screenshots below, and download the app here.

Update: It appears the Google+ app is not available to iPod touch owners, in spite of the iPod touch 4th gen having roughly the same specs of the iPhone 4 and cameras to shoot flicks and pics. As from the requirements in iTunes, Google+ is “compatible with iPhone 3G, iPhone 3GS, and iPhone 4”, with no mention of the iPod touch. We’ve confirmed with several readers (and our own staff) that it’s currently impossible to find and install the Google+ app both from the iPod’s App Store app and iTunes, which returns a “not compatible with this iPod” error.

Update #2: And the app has already been updated. The new version showing up on iTunes reports the following changes:

The requirements now mention “iOS 4.0 or later” (instead of iOS 3.1 in the first version), but it seems iPod touch owners still won’t be able to use it. 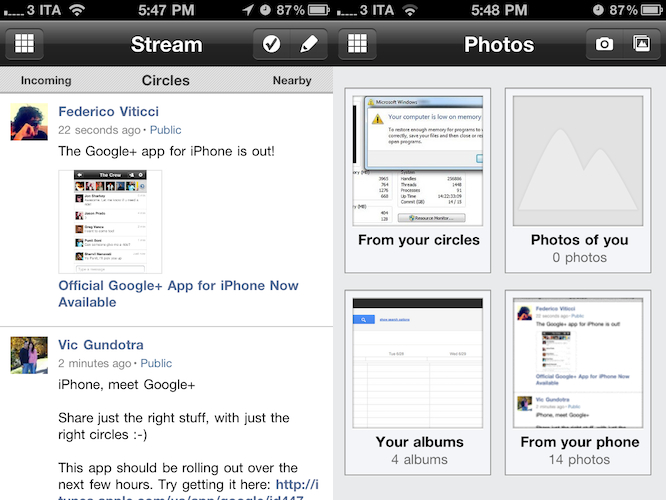 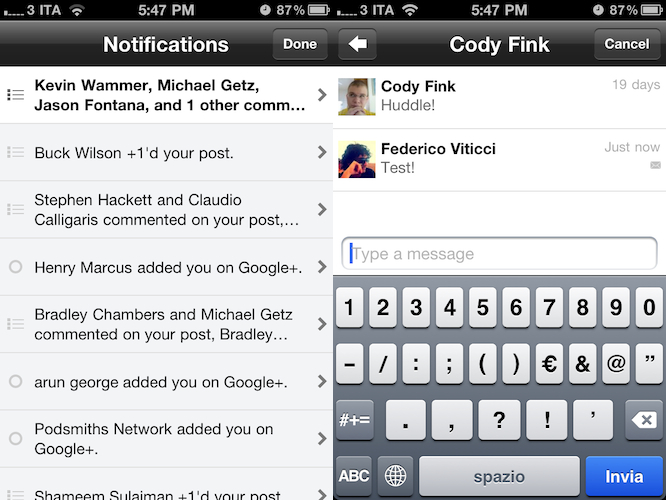 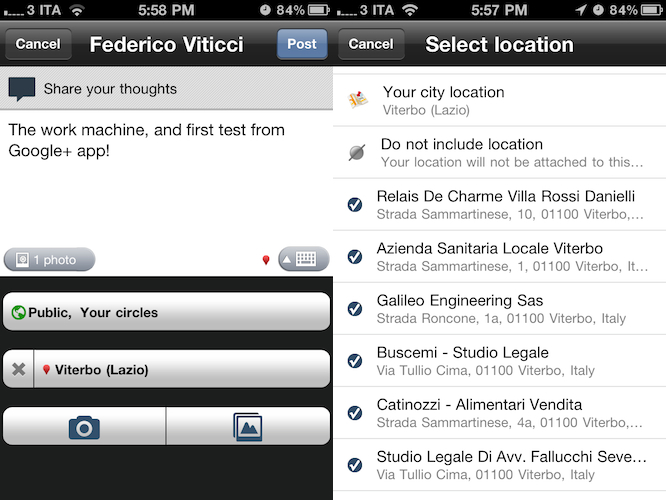 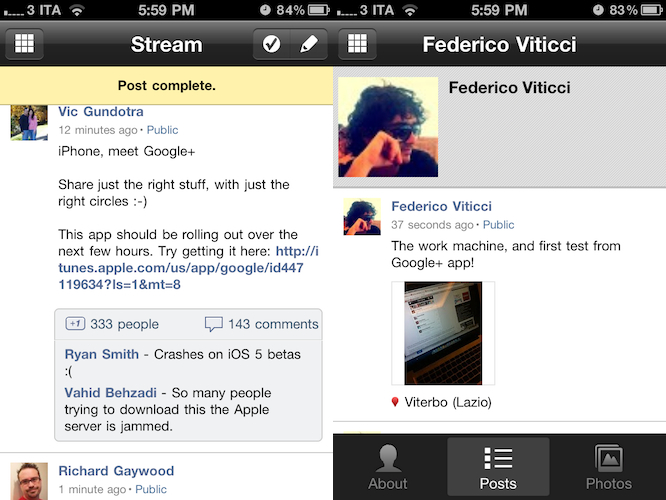 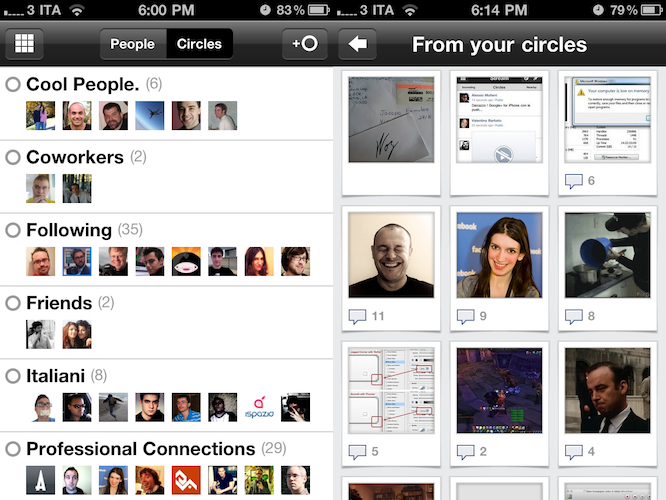 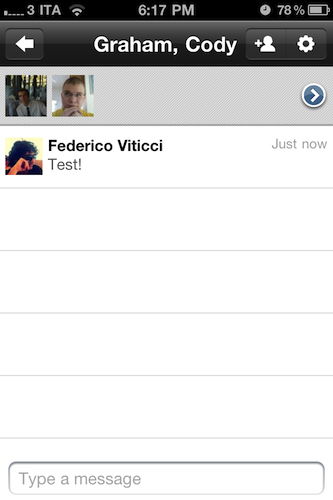