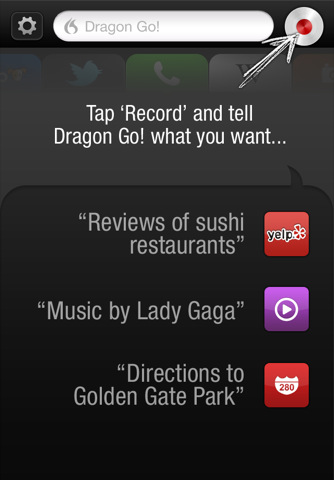 Voice-powered search has become increasingly popular in recent years as more and more people purchase smartphones such as the iPhone or an Android device. Google has extensive voice-integration on Android and similarly has iOS Apps that include the ability to search by voice commands, others such as Microsoft with Bing, Nuance and Siri have done similar things. Furthering their previous efforts, Nuance yesterday released a new app, Dragon Go!, that combines Nuance’s top-notch voice recognition with the intelligence to do what is actually being said.

It plugs into various services from the typical Google Search to Pandora, Fandango, Wikipedia, Yelp, IMDB and many more – in fact at launch the app supports more than 180 options. Consequently saying, “What’s the weather like?” will pull data from AccuWeather, whereas saying “Super 8 showtimes” will direct you to Fandango.

Not only does Dragon Go! hear what people are searching for, but it understands what they want, giving them direct access to relevant results from 180 of the most trusted and reliable content providers, including AccuWeather, Bing, ESPN, Facebook, Fandango, iTunes, Last.fm, LiveNation, Milo.com, OpenTable, Pandora ® internet radio, Rotten Tomatoes, Twitter, Wikipedia, Yelp, YouTube, Yahoo! and many others – with the list of content providers growing each day

Dragon Go also integrates with the iPhone so that if you say “Play Coldplay” you can play music straight from your device, similarly it will integrate with the Phone app, the Maps app and more. This is now Nuance’s fourth iOS app, and it complements their Dragon Dictation app and the more tradition Dragon Search app. Earlier this year there had been a number of rumors that Apple was set to do a deal with Nuance to integrate a service similar to what this app offers, but at the base iOS level. Dragon Go! is available for free in the US App Store.