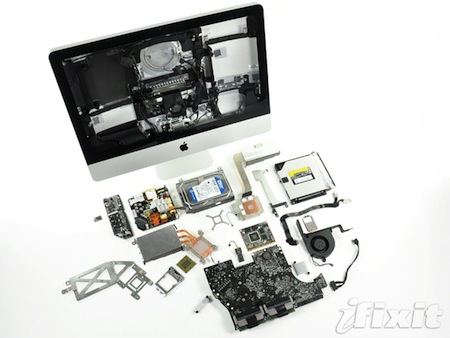 Following yesterday’s release of the new iMacs with Sandy Bridge processors and Thunderbolt technology, the guys over at iFixit immediately started tearing down a 21.5-inch model. In their official teardown article, available here, there are a few notes of interest: iFixit notes how, design-wise, nothing much has changed in the new iMacs, which can be opened in the same way of the old generation units by pulling off the magnetically-held glass and removing the screws holding the LCD in place. The display is manufactured by LG and it’s the same used in the previous-generation iMac. iFixit also gives the machine a 7/10 Repairability Score, noting that average users can easily replace RAM, but accessing the CPU and GPU requires to take out the whole logic board, which is described as a “tricky process.” The teardown also reveals the Thunderbolt connector is similar (but not the same) to the one found in the early-2011 MacBook Pros; one heat sink is reserved for the CPU, with the other assigned to the GPU.

As noted by 9to5mac, the first iMac 2011 benchmarks have started appearing on Geekbench’s website, revealing good performances for the new machines with results sometimes (depending on the model) above 2010 Mac Pros and early-2011 MacBook Pros. Here’s a screenshot from Geekbench’s browse section I took a few minutes ago: 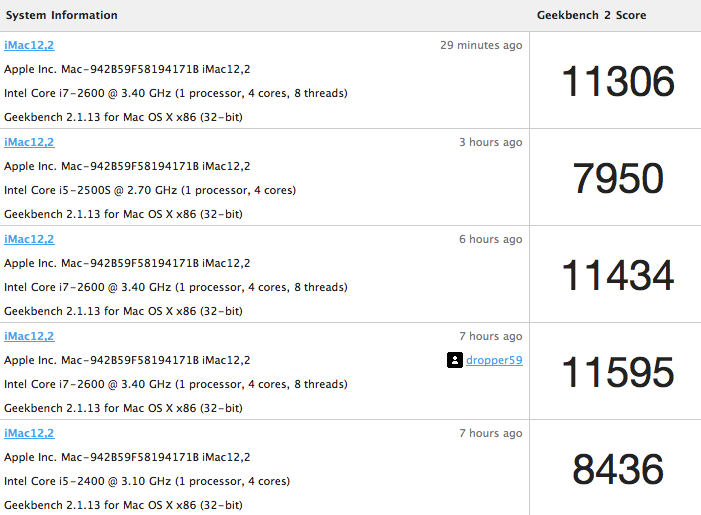 Compare the first results above with a list of official old Mac benchmarks that include Mac Pros, early-2011 MacBook Pros and a mid-2010 iMac: 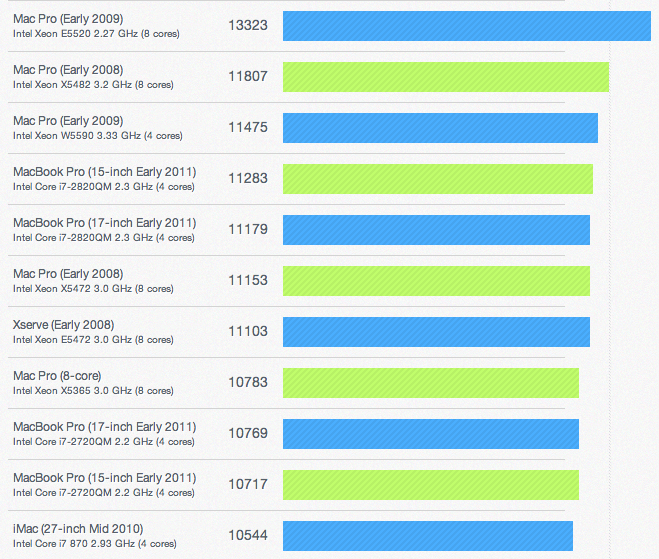 Macworld also tested a new 27-inch Core i5 iMac with 3.1GHz processor using Speedmark 6.5 and noted it was 16% faster than the old high-end iMac model in overall usage, while it was 22% faster than the old iMac in an iTunes encoding test. You can read the full report here, and more tests will be published in the next days.

Another 2010 BTO model, the 27-inch 3.6GHz Core i5 iMac, used a dual core processor at a faster clock speed. In terms of overall performance, the new standard 3.1GHz Core i5 iMac outperformed the 3.6GHz 2010 BTO iMac by 14 percent. In applications that make efficient use of four processors (Cinebench, Mathematica, and Handbrake), the new iMac was dominant, finishing 35 percent, 67 percent and 42 percent faster, respectively. In many tasks, however, having faster but fewer processors is an advantage, as can be seen in zipping and unzipping folders, and opening a Word document in Pages.

Compared to the 15-inch 2.2GHz Core i7 quad core MacBook Pro, the new 3.1GHz Core i5 iMac was 10 percent faster overall, and a few seconds faster in almost all of our individual application tests. 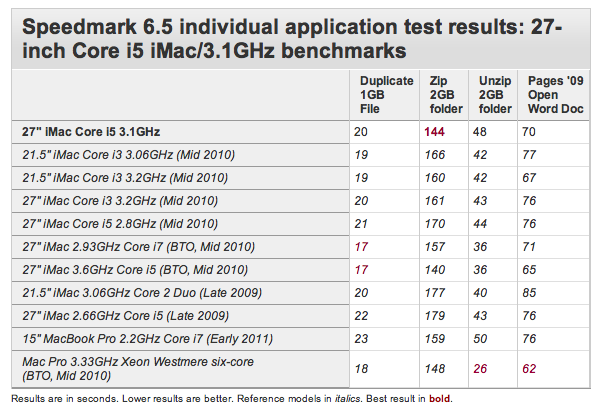