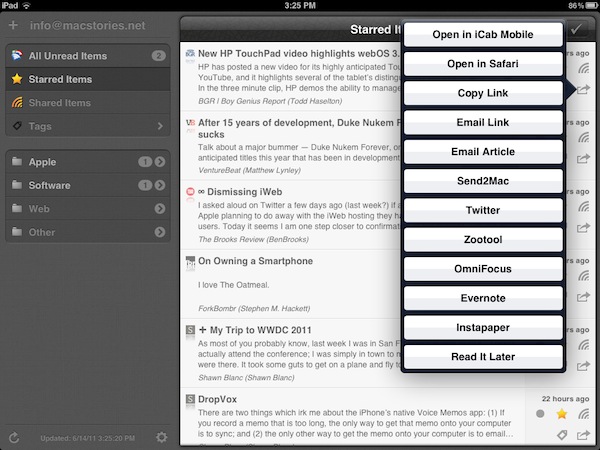 There’s no doubt Mr. Reader is becoming one of the most powerful and integrated RSS apps for the iPad. Ever since I reviewed version 1.0 back in April, the developer went back to work to implement several features that are making Mr. Reader a Google Reader client that’s not limited at fetching and marking items as read from a native interface. Rather, Mr. Reader shipped with a good selection of external services to send your favorite articles to, but version 1.1 added support to create tasks in OmniFocus and integration with third-party iOS browsers like iCab. Whereas most feed readers want to provide a good reading experience but don’t focus on letting you get those feeds out of the closed Google Reader experience, Mr. Reader aims at filling the gap between online services / apps and RSS.

Version 1.2, released yesterday and available now at $3.99 in the App Store, takes the whole concept of getting articles out of the app a step further. With Evernote, Send2Mac and Terminology support, you’ll be able to save articles as notes in your Evernote account, send webpages to your desktop browser in the background thanks to the great Send2Mac service (which already works on Lion), or get definitions of words you don’t know if Agile Tortoise’s app is installed on your iPad. Unlike Instapaper, definitions are not provided in a popover inside the application (at least on iOS 5): when you select a word and hit the Terminology button, you’ll be brought directly to Terminology with the selected word at the top of the list and a popup at the bottom saying that you opened that word from Mr. Reader. 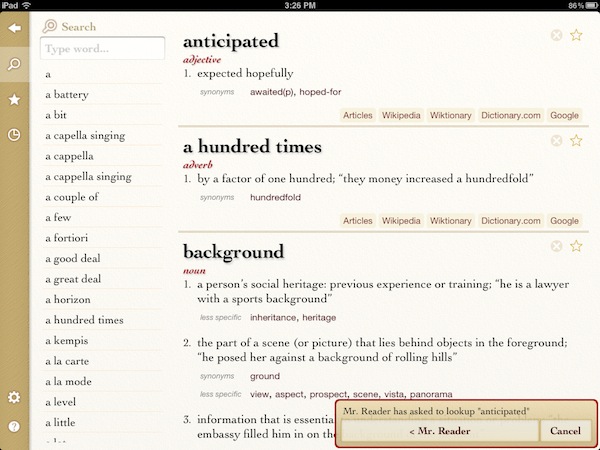 Evernote support is really simple, and I like it: the app will create a blank note with just the title and URL section saved from Mr. Reader. As for Send2Mac, it works perfectly but it only allows you to configure one computer – I’d love to add both my MacBook Pro and iMac to Mr. Reader.

There’s a lot more in Mr. Reader 1.2 though. Tapping on an article will let you open all feeds from the original source; you can send articles to Readability, if you’re a fan of the service; a new theme, Sydney, has been added and others have been refined; the annoying modal sync window has been changed to an unobtrusive spinning indicator that doesn’t overlay the feed list. Alongside dozens of other bug fixes and improvements, Mr. Reader now remembers your preferred view for each feed automatically.

At $3.99 and with updates coming out every few weeks to make the app more stable and integrated, I’m excited to see Mr. Reader taking on Reeder as the most powerful (yet elegant) iPad RSS reader. While looking forward to iOS 5 and (perhaps) iCloud integration, you can get the app here.