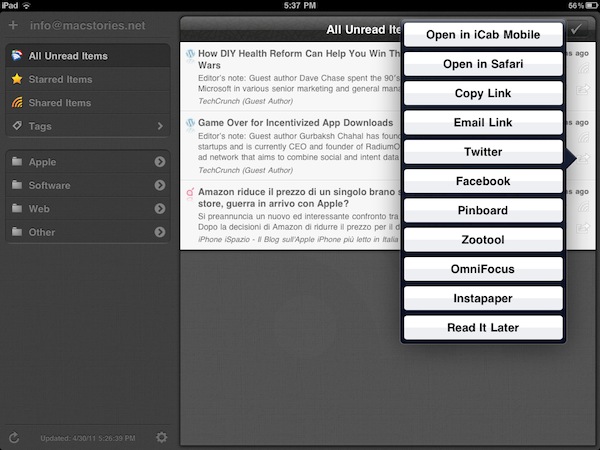 Mr. Reader, the RSS app I reviewed earlier this month, keeps getting better and aims at becoming the most powerful, yet elegant Google Reader client available on the iPad. The first version of Mr. Reader was so full-featured for being a 1.0 release that it made me consider placing it on my homescreen to see how I would go by in my daily workflow (which implies dealing with at least 500+ articles per day) without Reeder, the app I’ve used for months. Mr. Reader wasn’t perfect – it still isn’t – but it was one of those promising pieces of software that showed great things to come. The developer announced a major update was already in the works, and as I kept using Mr. Reader as the only feed reading app on my iPad I wondered would could get better, and whether my main complaints with the initial version would be addressed or not. The modal window for sync is still there, but Mr. Reader 1.1 is a huge update overall that makes navigating between unread feeds and getting things done with the app a more pleasing, productive experience.

Mr. Reader 1.1 can now send articles as “tasks” to OmniFocus and Things. In OmniFocus, you’ll get a task with the title already filled in, and the article’s URL in the notes. Mr. Reader is now deeply integrated with other iOS apps and web services: the app can forward items to iCab, Mercury and Atomic Web Browser, send articles to Diigo and, more importantly, it allows you to read in Readability view. Articles can be read in fullscreen mode (you can change this in the settings), Instapaper and Read It Later got an option to remove the confirmation dialog, and switching between the unread list and a single article has been improved with the implementation of the “pinch” gesture. I find myself really digging the possibility to tap on a headline to read the article in fullscreen, then pinch to go back to the main list – it feels very natural. As far as marking items as read goes, a new tap & hold action on the “mark as read” button allows you to automatically hide items older than 1,2,3 days or 1,2 weeks.

There are several minor improvements throughout the whole app as well. For instance, images can be saved to the camera roll, and the settings have been redesigned to host cleaner service configuration options (admittedly, Mr. Reader has a lot of services to play with). The reading panel in portrait has been tweaked to automatically slide back after hitting the “mark as read” button (a minor annoyance in the first version), and the font family can now be changed in the article view.

As I said above, Mr. Reader is definitely en route to become the most powerful RSS application on the iPad, and the most-integrated with third-party apps and services. If you didn’t try version 1.0, perhaps now it’s time to consider following this link and click the Buy button.