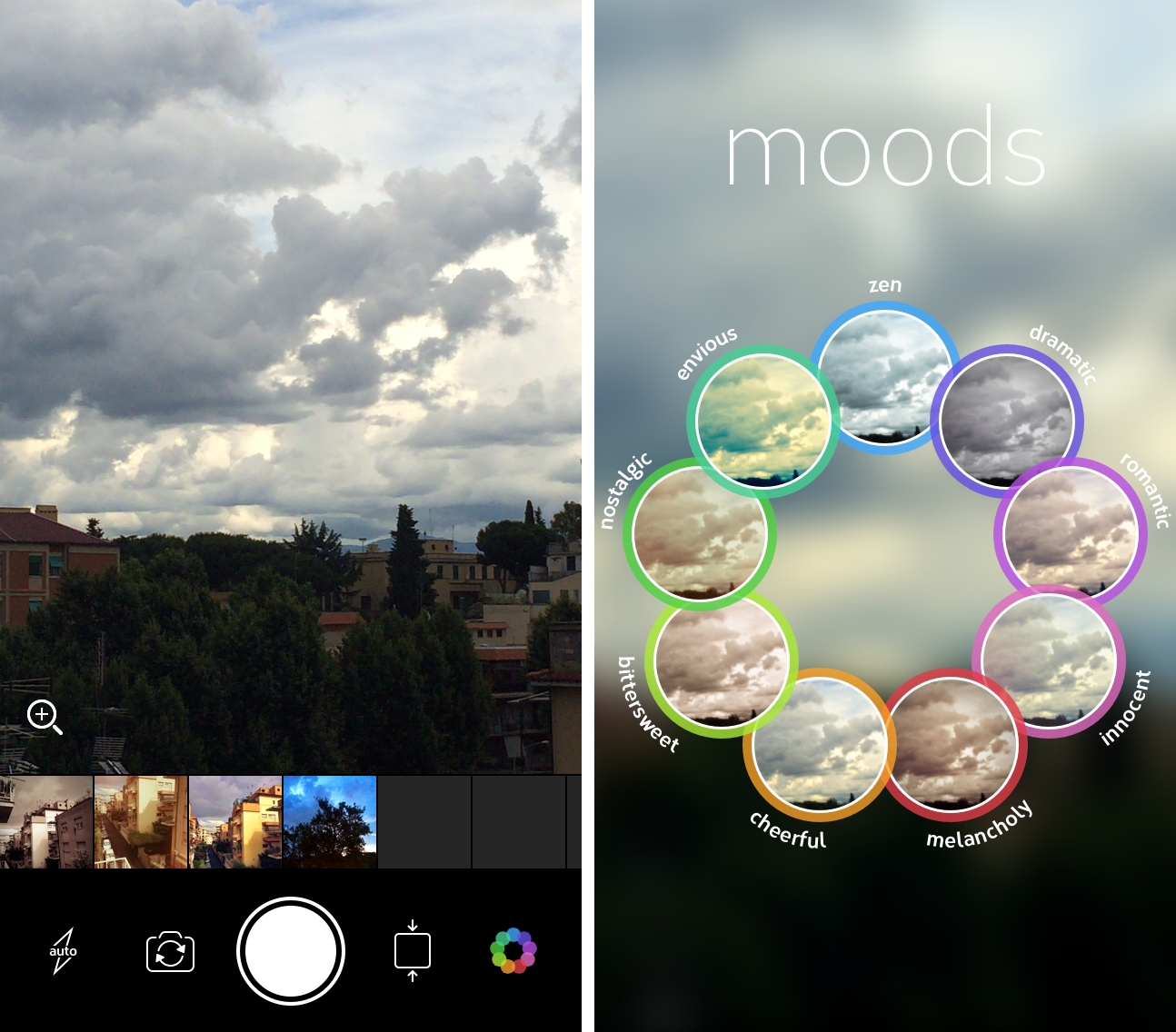 “We wanted to create a complementary camera app to Camera+ for users who wanted a simple, one-touch app for shooting and sharing on the go”, Lisa Bettany tells me over email. Lisa is the co-founder of Camera+, the popular camera app by Tap Tap Tap that, since 2009, has amassed over 12 million downloads and become a fixture of the App Store’s Top Charts, which can be rare for a paid app with additional In-App Purchases. Today, Tap Tap Tap is launching MagiCam, which, unlike Camera+, does away with professional editing tools and focuses on simple filters and quick sharing.

MagiCam is the opposite of Camera+: where Tap Tap Tap’s premiere photo app is packed with controls in the viewfinder, sliders and settings in the editing section (relaunched last year), and dozens of options to tweak a picture and turn it into the perfect shot, MagiCam launches to a simple camera view with a few basic buttons. You can turn on the flash, switch between the rear and front-facing camera, and choose a square format, but you won’t find the advanced controls of Camera+ in MagiCam – you can’t even tap to focus because the app will do that automatically. There’s a zoom slider if you want to capture distant objects and a gallery of recent pictures, but that’s it.

The design is intentional, as MagiCam was created to leverage the editing technologies of Camera+ in a lightweight and fun app that’s not intimidating or difficult to use, which Camera+ can be. In our conversation, Lisa noted that “complex editing” happens in the background without exposing controls to users who don’t want to deal with them.

MagiCam’s focus is on speed and filters, which are called “Moods” in the app and appear to be a selection of the 9 most popular filters from Camera+. When you shoot, photos are saved to the Camera Roll, but they’re also automatically enhanced using a feature that’s reminiscent of Camera+’s Clarity, which exalts scenes with vibrant colors and higher contrast. The developers believe in the automatic enhancement mode so much, the option is always active and applied to every photo you take in MagiCam but, because results may vary, there’s a toggle to save originals to the Camera Roll in the Settings app. 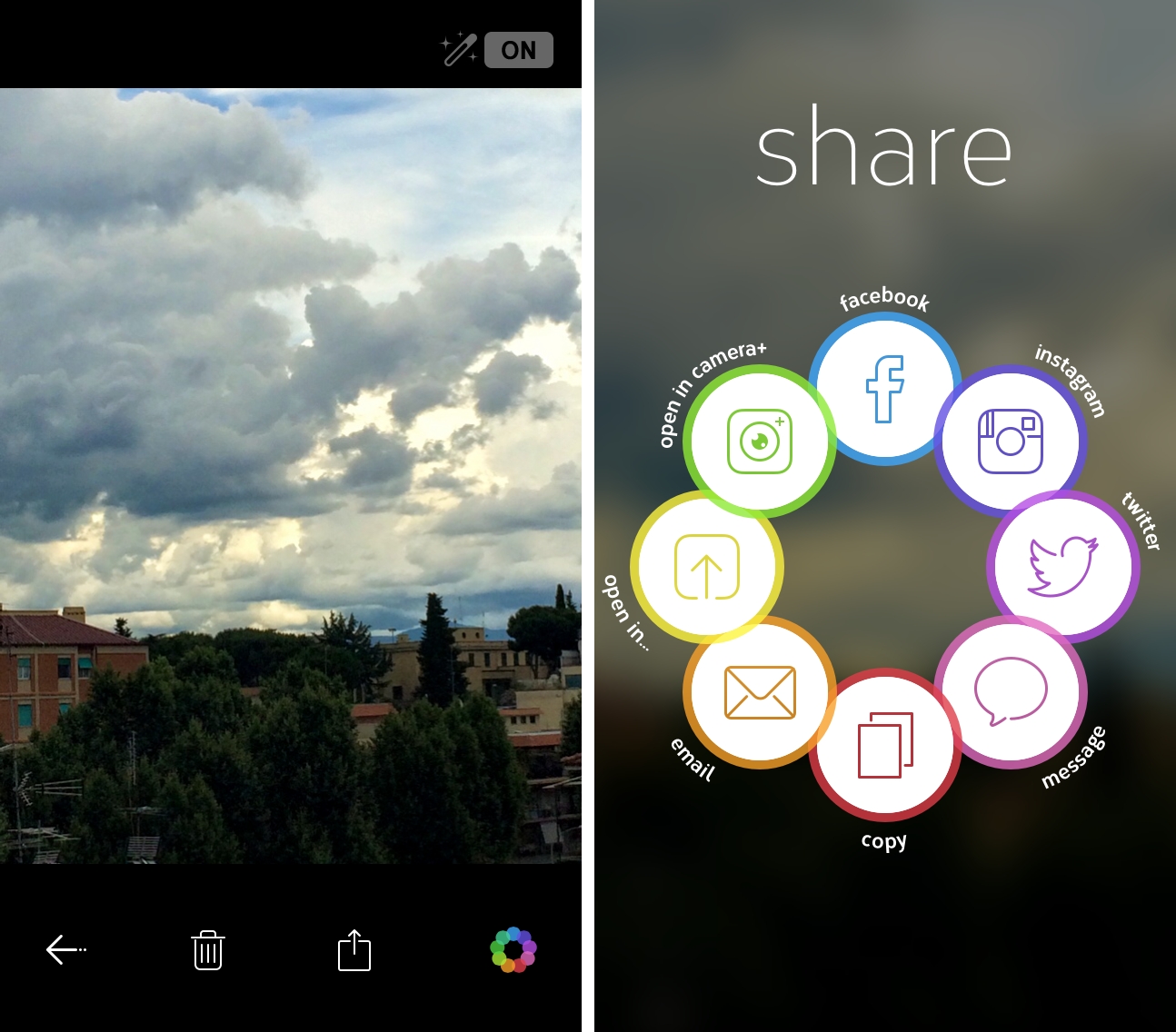 The big appeal of MagiCam is that it wants to be easy to use and fun, and I like how Tap Tap Tap reduced user interactions to the minimum, putting the spotlight on animations and sound effects instead. Both the Moods and Share screen consist of circles that comprise a larger “flower” interface element (similar to Yahoo’s one in New Digest) that appears on screen with a fun transition and accompanying sound effect; filter previews are rendered in real-time, and that is pretty neat, visually speaking. Every button (and there aren’t many) comes with an associated animation or sound effect, which reminded me of the attention to visual and aural feedback of Tweetbot.

I don’t know if I’ll use MagiCam on a daily basis, primarily because I seldom want to take a picture and apply a heavy filter to it. But I think that MagiCam is a good idea for people who regularly share edited photos and have been looking for the filters of Camera+ in a more approachable product. In my tests, MagiCam was fast and I liked the “Open In” and “Copy” buttons available in the Share screen, as well as the Camera+ and Instagram buttons. The filters and sharing options aren’t revolutionary, but they’re well done and clearly based on the work put into Camera+ over the past few years. I found the lack of Camera Roll integration disappointing, though, as I couldn’t figure out a way to import existing photos into MagiCam and edit them from the app.

At this point, there are thousands of photo apps with filters on the App Store, whereas Camera+ was among the pioneers of professional third-party camera apps back in 2009. MagiCam makes sense for Tap Tap Tap given the tech they have with Camera+ and users who are likely intimidated by the app’s complicated nature, and, overall, it’s fun, it’s got fast navigation and interactions, and it looks good on iOS 7.

MagiCam is available at $0.99 on the App Store, and you can watch the promo video below.