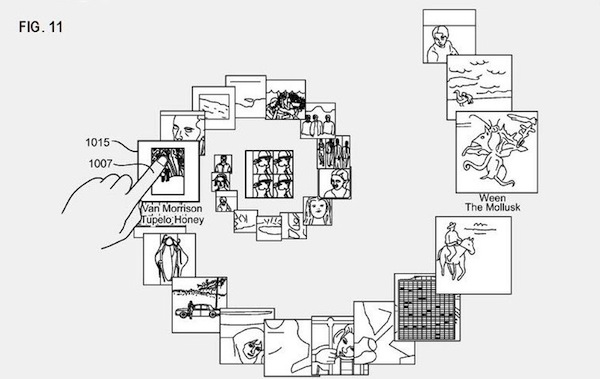 I swear this was completely unintentional. A few days ago we pointed out that there was a tweak available in a repository in Cydia that allowed you to modify your iPhone’s Springboard and turn it into a spiral of icons. In that post, I said it was useless. I still think it looks nice, but as far as user experience goes the spiral in the Springboard is a terrible idea.

Thing is, it looks like Apple may be interested in using a similar implementation across devices in the future to replace Cover Flow. As Patently Apple reports, the designers at Cupertino have been playing around with the idea of a Spiral UI for multitouch interaction in place of a simple horizontal Cover Flow view. The new Spiral UI could be used in the next iPad, iOS 5, Lion…that can’t be spotted in a patent design. Radial and scrollable icon menus, aren’t new to Apple patents at all.

Lots of technical details about the design are provided in the patent, so head over Patently Apple if you want to dive deeper into the interface manipulation schemes and gestures underlying the invention. Put simply, someone at Apple has been thinking about turning Cover Flow into a more tridimensional experience, which we think would be interesting to see.

Not like the Spiral Springboard – I still think that’s useless.