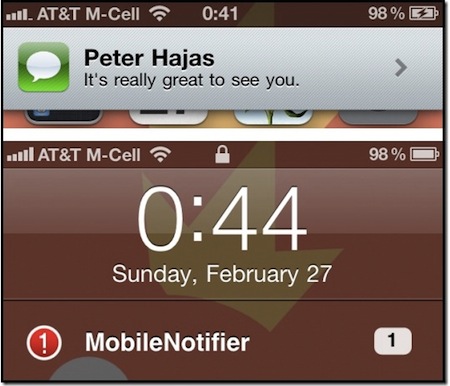 The WWDC 2011 keynote kicks off in less than two hours, and people waiting at the Moscone West are being let inside the convention center as we speak. As last minute speculation on what Apple is going to unveil with its upcoming major new version of iOS, This Is My Next claims it has received word from an inside source that iOS 5 will feature a new Apple messaging protocol for free SMS and MMS texts between iOS users – in the style of RIM’S Messenger application that lets BlackBerry owners communicate with each other for free. Just like FaceTime allows iPhone owners to video chat, the new messaging app could enable iPhone, iPad and iPod touch owners to exchange text messages for free using Apple’s own solution:

The word is that Apple is readying it’s own MMS / SMS protocol which will be a native part of the phone. We’re not entirely clear on how this would work, but apparently it will be able to automatically identify iOS users and route the message accordingly. We’re told the functionality would be similar to third party applications like Textie, but with less fuss.

Furthermore, This Is My Next also corroborates rumors we’ve heard about the revamped notification system and widgets, claiming that iOS 5 will feature Android-like notifications with a white pulldown menu from the status bar that will list recent notifications and widgets.

Messages will appear and then slide back up in a unobtrusive manner, similar to webOS. There have been some leaked screenshots floating around the web for the last 24 hours, but those are not the real deal. The actual window looks more like a white, gradient Growl notification.

The notifications will be constantly accessible through a pulldown window which you reach by swiping at the top of the screen downward… just like Android. Not only will this screen house your recent notifications, but it will tout proper widgets like weather, stocks, and more.

Last, according to the website the lock screen will also go under a major refresh with notifications displayed on screen with the app’s icon on the left so users will be able to swipe over them to go to the specific application that sent the message.

We’ll be liveblogging the WWDC 2011 keynote here in less than an hour.