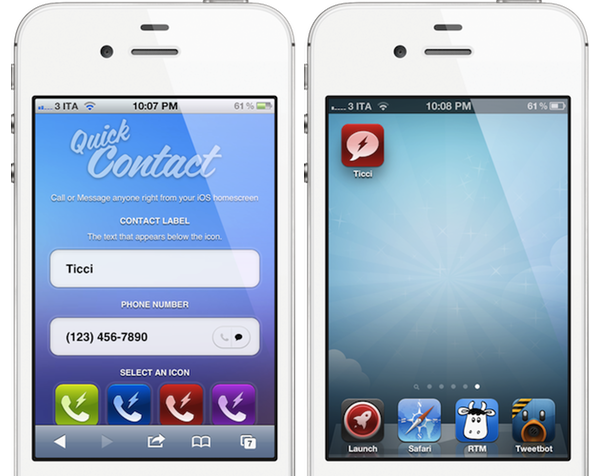 It appears a new trend among independent iOS developers is that of creating shortcuts to save time on tedious iOS tasks such as activating WiFi and Bluetooth, open third-party applications, or call someone. First came a bunch of web-based tools to create this kind of home screen shortcuts, including design extraordinaire Jeff Broderick’s Settings. We’ve covered this whole shortcut phenomenon quite extensively on MacStories, including Siri and the iPhone’s URL schemes (links that redirect iOS to apps or specific sections inside an app) and Launch Center, an app that spurred a debate around shortcuts and Apple’s review policies after the app was rejected from the App Store, whereas similar tools had been approved for sale. It was also discovered that Apple plans on making Settings unaccessible via URL schemes on the upcoming iOS 5.1.

Now Jeff Broderick is back at it, pouring his typical style and attention to detail into a new project called QuickContact. QuickContact allows you to create Home screen icons for people to call or send a text message to; you can choose between 15 icons designed by Broderick or upload your own upon creating a new shortcut, which is done through Safari on your iPhone or iPod touch. I won’t lie – I like Jeff’s style a lot, but I wish the web app was capable of supporting email addresses, too, besides phone numbers; I’d also like to launch the Phone or Messages apps directly without opening Mobile Safari first. Last, the app requires you to install a certificate on your device for this automation to work, and Broderick specifies on his website that “No information is saved”.

For those interested in trying out this first version of QuickContact, you can check out the project’s page here.