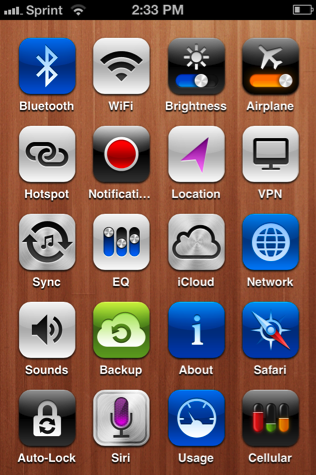 I manage bluetooth constantly on my iOS devices, thanks in part to the JAMBOX. Jeff Broderick’s iPhone Settings Shortcuts provide a much needed shortcut to Bluetooth settings that are otherwise buried. Where iOS doesn’t provide quick access to much beyond volume and brightness sliders, Android has always an advantage when it comes to managing settings between widgets or toggles in the notification tray. Being able to turn off the 3G signal and leave my phone on Wi-Fi was something I did in the evenings with my Droid to avoid late night phone calls and text messages, while still receiving incoming email and Twitter notifications to read in the morning. A silent phone’s display will still light up when rang.

As of the iOS 5.1 beta that was recently released, Apple’s blocking access to the Settings app through these Home screen shortcuts. Clearly I’m not a typical iPhone user, but even if I was, so what if I want to clutter my Home screen with harmless shortcuts? I don’t understand the motivation to kill off a feature like this unless it’s a security concern.

These setting shortcuts are great because they provide a clear and easily labeled path to things I want to change or manage. I can’t say the same about the Settings app, especially if something is buried in a submenu under ‘General’.

iOS 5.1 isn’t final yet, but there’s a pretty good chance system setting shortcuts are going to remained blocked. If these kinds of shortcuts are important to you, then you may want to hold off on the update when it’s seeded to the public.

[Cult of Mac via TiPb]