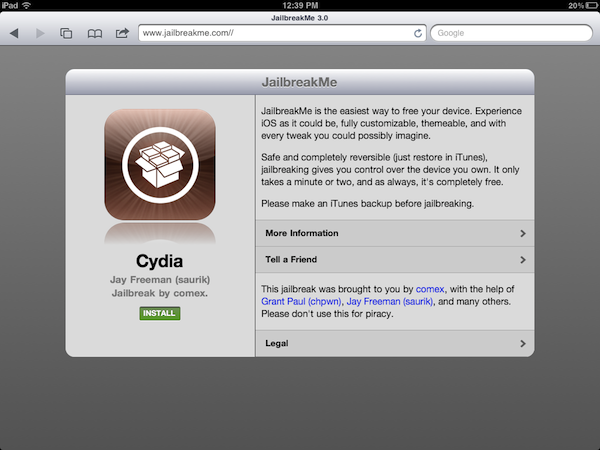 The long-awaited new version of popular jailbreak tool JailbreakMe has been released today and, as previously announced by developer and hacker comex and the Dev-Team, it is capable of jailbreaking a variety of iOS devices running iOS 4.3 and above, including the iPad 2. The procedure of jailbreaking allows users to install unauthorized software on their devices, like Cydia, an alternative marketplace that contains apps, tweaks and graphical modifications Apple can’t approve for sale in its App Store. The popularity of JailbreakMe raises from the fact that the tool is entirely Safari-based, enabling users to press a button in their browser to install Cydia with ease, without having to plug the device into a computer, restore, and follow other additional steps. JailbreakMe takes a few minutes to install Cydia, and it’s completely reversible in iTunes with a restore.

Because of the issues with people leaking the hack behind JailbreakMe 3.0 in the past week, creator comex was forced to accelerate the release, fearing a patch from Apple coming soon with a software update. Just like JailbreakMe 2.0, in fact, the new tool uses a vulnerability in iOS’ PDF display engine to allow the installation of Cydia from Safari. The hole will likely be fixed soon by Apple with a software update, perhaps iOS 4.3.4, but the same Cydia developers are offering a tweak called PDF Patcher 2 (available in Cydia) which patches the JailbreakMe vulnerability after the jailbreak.

JailbreakMe 3.0 supports the following devices as explained by a Dev-Team blog post:

The Dev-Team also illustrates the current scenario of restoring a device to older versions and SHSH blobs:

Q: Will I permanently lose the jailbreak if I need to restore my device?

A: For all except the iPad2, saving your SHSH blobs should let you always restore your device to iOS versions where this jailbreak works. The iPad2 is a little more complicated. If you have a wifi-only iPad2 and saved SHSH blobs, you’re in good shape. But if you have the GSM or CDMA iPad2, you won’t be able to restore to 4.3.3 or lower once Apple stops signing its baseband. There are a few ideas that might work to get around this limitation, but for now it’s best to assume there’s no going back to 4.3.3 once 4.3.4 is out for iPad2 GSM or CDMA owners.

As we said above, the exploit will likely be fixed soon by Apple (some bloggers are already claiming as early as this week), so if you’re willing to jailbreak your iPad 2 on iOS 4.3.3 or iOS device, head over JailbreakMe.com now, and follow the steps to install Cydia. For Cydia app & tweak recommendations, check out our coverage from the past months, and give a try to Cydia Search to browse available software for your jailbroken device from your desktop.