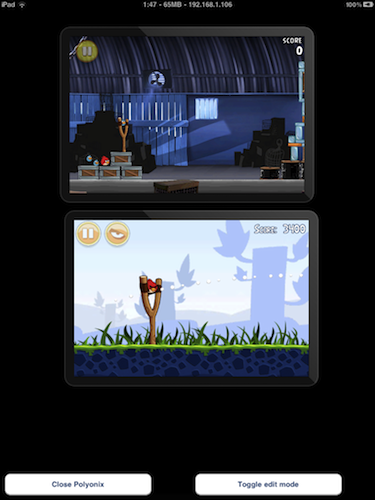 In what can only be described as borderline ridiculous, but a very awesome tweak, Aaron Ash has managed to hack together a way in which two iPhone apps can run side by side on the iPad. In a blog post, Ash makes it clear that at this stage it is only really a proof of concept, not yet ready for a public release. In particular there are some bugs that are preventing audio from playing and accelerometer data from being detected by the apps.

The bottom right button turns on “edit mode” which allows you to rearrange applications, and rotate them (Angry Birds normally runs in landscape, here they’re turned). I’m debating on if I should go for the typical desktop feel or make it more SpringBoard-like and keep apps in preset locations.

Nonetheless he says he managed to “waste plenty of time already playing 2 games of Angry Birds at the same time” on the same screen. In fact he managed at one stage to play 3 at a time, which worked until he added a fourth, which crashed the tweak. He notes that “performance is actually pretty good, definitely useable” but with those bugs he says he probably wont release it for a few months. That said, he does note that he might show the tweak off at the jailbreak meetup in New York that is happening on Saturday, July 10th.