After years of speculation, it’s now official. At the special media event in New York, Verizon has just announced that Apple’s iPhone is coming to their network. “If the press writes something long enough, eventually it comes true”, said Verizon’s Lowell MacAdam before the announcement. “Today we’re partnering with a giant of the industry, and that’s Apple.”

The iPhone 4 is coming to Verizon next month, as the rumors suggested. Apple and Verizon began testing CDMA iPhone in 2008, and Apple then released the iPad on Verizon in 2010. The iPhone is coming in February, it will be CDMA (no LTE) and it’s already listed on Verizon’s website. It’s the same iPhone 4 you know and love, only on Verizon and it connects to CDMA and EvDO networks.

The Verizon iPhone, more specifically, is coming on February 10. It will be available starting at $199.99 for the 16GB model with a 2-year contract.

Looking at the pictures provided by Verizon, it looks like this iPhone 4 has two new black lines on top to guarantee CDMA compatibility:

Price for the 32 GB model starts at $299. Mobile hotspot functionality with wireless tethering is included up to 5 devices. Pre-orders will start on February 3.

As with all CDMA devices, the Verizon iPhone can’t do voice and internet browsing at the same time. That’s bad, but we saw that coming.

And here’s a photo of the Personal Hotspot feature, courtesy of Engadget’s hands-on with the device. 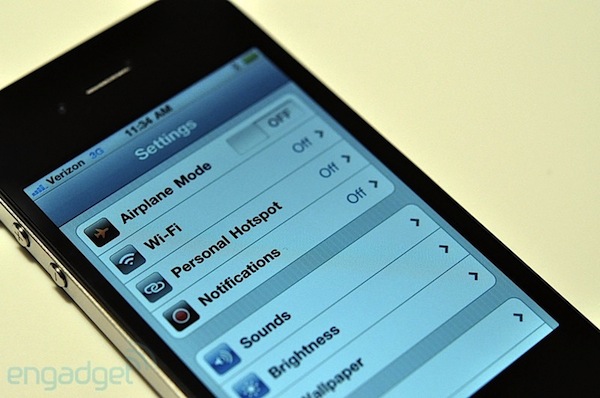 Verizon Wireless & Apple Team Up to Deliver iPhone 4 on Verizon

BASKING RIDGE, New Jersey and CUPERTINO, California—January 11, 2011—Verizon Wireless and Apple® today announced that the iPhone® 4 will be available on the Verizon Wireless network beginning on Thursday, February 10. Qualified Verizon Wireless customers will be given the exclusive opportunity to pre-order iPhone 4 online on February 3, ahead of general availability.

iPhone 4 is the most innovative phone in the world, featuring Apple’s stunning Retina™ display, the highest resolution display ever built into a phone resulting in super crisp text, images and video, and FaceTime®, which makes video calling a reality. iPhone 4 on Verizon Wireless will also include new Personal Hotspot capabilities allowing customers to use iPhone 4 to connect up to five Wi-Fi enabled devices.

“We are pleased to introduce millions of wireless users to the industry leading iPhone 4 on the nation’s most reliable network,” said Lowell McAdam, president and chief operating officer of Verizon. “This is an important step for the industry as two great companies join forces to give wireless customers one of the most important technological additions to the mobile landscape this century.”

“Verizon Wireless customers have told us they can’t wait to get their hands on iPhone 4, and we think they are going to love it,” said Tim Cook, Apple’s chief operating officer. “We have enormous respect for the company Verizon has built and the loyalty they have earned from their customers.”

iPhone 4 features a 5 megapixel camera with LED flash, HD video recording, Apple’s A4 chip, a 3-axis gyro and a beautiful glass and stainless steel design like no other mobile phone. iPhone 4 also comes with iOS 4, the world’s most advanced mobile operating system, which includes multitasking, folders, Game Center, AirPlay® and AirPrint wireless printing. iPhone 4 customers have access to the world’s most popular App Store℠ with more than 300,000 apps available in an incredible range of 20 categories, including games, business, news, sports, health and reference.

iPhone 4 will be available on the Verizon Wireless network beginning Thursday, February 10 for a suggested retail price of $199.99 for the 16GB model and $299.99 for the 32GB model with a new two year customer agreement. iPhone 4 will be available at more than 2,000 Verizon Wireless Communications Stores nationwide, online at www.verizonwireless.com/iphone, at Apple Retail Stores, at the Apple Store® (www.apple.com), at Apple Authorized Resellers, and by calling 1-800-2 JOIN IN.