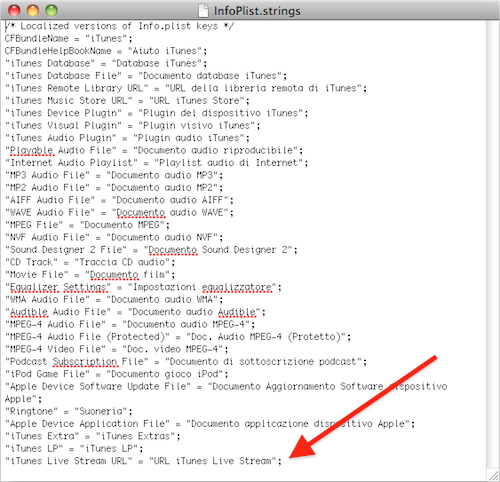 Italian blog The Apple Lounge found something really interesting the property list file of iTunes 10.1: code references of a feature called “iTunes Live Stream”, although it’s not clear what such feature could be aimed at. The Apple Loung and MacRumors speculate it might be something video-related, as Apple recently deployed its own HTTP streaming solution for Apple devices by live streaming the latest Steve Jobs’ keynotes.

Meanwhile, as noted in a series of Tweets from @dustinrue, other references to “iTunes Live Stream URL” in iTunes 10.1 files suggest the ability to handle “itls” as a URI scheme in much the same way that iTunes uses “itms” to handle requests to connect to the iTunes Store.

We could speculate these “iTunes Live Stream” references might point out to the possibility to generate our own streams of audio and video content, perhaps from the cloud to any device. What if iTunes Live Stream was a protocol that would allow users to share specific content with friends and family, thus the “itls” scheme?

Speculation and guesses about what Apple is going to announce tomorrow are coming from all over the web. While All Things D believes we are not going to see anything streaming or cloud related, we’re hoping Steve Jobs plays the surprise card tomorrow.