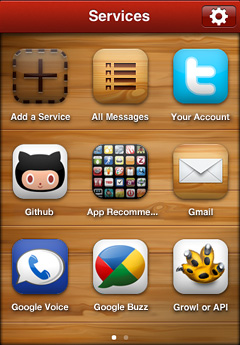 Most iOS users agree that notifications on iPhones, iPod touches and iPads are nothing compared to what Google has implemented in Android, or what HP showed at the webOS event a few days ago. Personally, from what I’ve seen so far, I believe the notification system demoed on the HP TouchPad is the most intriguing one, with messages staying out of the way in the top menubar but still accessible with a single tap that opens a popup menu.

Our source, who asked to remain anonymous, didn’t know the identity of the company, except it already has an iPhone app in the App Store.

One candidate is Boxcar, a free app from Appremix that enables push notifications for Twitter, Facebook, and email. Boxcar’s system has been highly praised, especially the new iPad version.

There’s no doubt that Boxcar offers an advanced and easy way to stay on top of updates coming from social networks, email and websites; Boxcar currently has a universal app in the App Store but the service also works on the web. The app of course doesn’t deploy its own notification system on top of iOS, but it aggregates notifications inside a single UI that’s easy to navigate and manage. I can see Apple wanting to build something like this in iOS 5, although they would still need to find a way to get rid (and thus redesign) the annoying alert boxes and unread badges that come with iOS now. Apple might as well ditch popup alerts altogether and take an approach similar to HP, aggregating everything into a central notification app as well.

It will be interesting to see what iOS 5 will bring to the table with notifications and social connections; Boxcar can be a great fit for Apple.