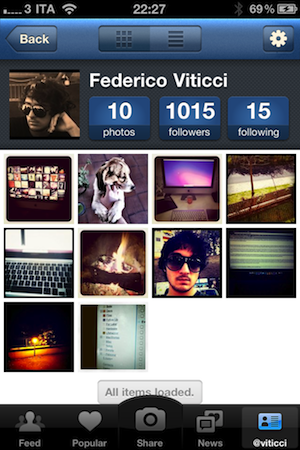 After the launch of an official API a few months back that allowed developers to read content posted on Instagram and display photos in external iOS, Mac and web apps, the service saw a huge growth in popularity, registered users, and connected applications capable of visualizing Instagram’s streams outside of the (only) official iPhone app. We have seen a plethora of iOS and Mac apps coming out in the past weeks, giving users the possibility to browse Instagram through a “client” different from the app, providing new interactions and interface schemes otherwise impossible without the use of an API. What the API lacks though, is read access to let 3rd-party apps upload to Instagram.

As MG Siegler at TechCrunch reports, Instagram founder Kevin Systrom has no plans on opening a full-read API to let other control the social stream and upload photos not generated with Instagram’s filters and requirements, but they do have a plan to allow developers to easily send files to the Instagram app. This feature is called “iPhone Hooks” and it sounds a lot like iOS’ default “Open In” menu combined with clever URI schemes: provided an application can snap photos and save them to jpeg or png, Instagram can let this app hook into the posting process to transfer the file from app x to Instagram. Just like in the 100 Cameras in 1 iPhone app, users can snap a picture and “send it to Instagram” to apply filters and upload. With iPhone Hooks, any photo app in the future could be updated to support sending a photo to the filter interface, or simply open a specific user stream, tag and location feed. The possibility to pass along photos is of course the most intriguing option, as apps like Photogene, Camera+ or Camera Genius could take advantage of that to shoot photos, let users apply filters and edits, then send to Instagram. iPhone Hooks apparently don’t let developers apply any sort of watermark or ID to the photo (example: “shot with Camera+”) as the file is still processed by Instagram; however, users could still leave a comment to specify what app they used, and overall it’s a good thing for a 3rd-party dev to have an app that works with Instagram.

Co-founder Kevin Systrom compares this functionality to the copy and paste functionality baked into iOS. But again, this is for images, not text. “We wanted to make it easier for other iPhone apps (and iPhone web-apps) to hook into Instagram to open a particular item or post a photo through our app,” co-founder Mike Krieger says. Yes, you read that correctly, this can work with web-based apps too.

Currently, only 100 Cameras in 1 is using this functionality, but Instagram says they’re discussing implementation with other partners.

When triggered, Instagram will immediately present the user with our filter screen. The image is preloaded and sized appropriately for Instagram. Other than using the appropriate image format, described above, our only requirement is that the image is at least 612px tall and/or wide. For best results, Instagram prefers opening a JPEG that is 612px by 612px square. If the image is larger, it will be resized dynamically.

An important note: If either dimension of the image is less than 612 pixels, Instagram will present an alert to the user saying we were unable to open the file.

The new feature can be tested in the 100 Cameras in 1 iPhone app, and it’s likely more developers will support it in the next weeks. With iOS 5 rumored to get direct Twitter integration for photos, sharing pictures on our iPhones and iPads could soon become a very different process.