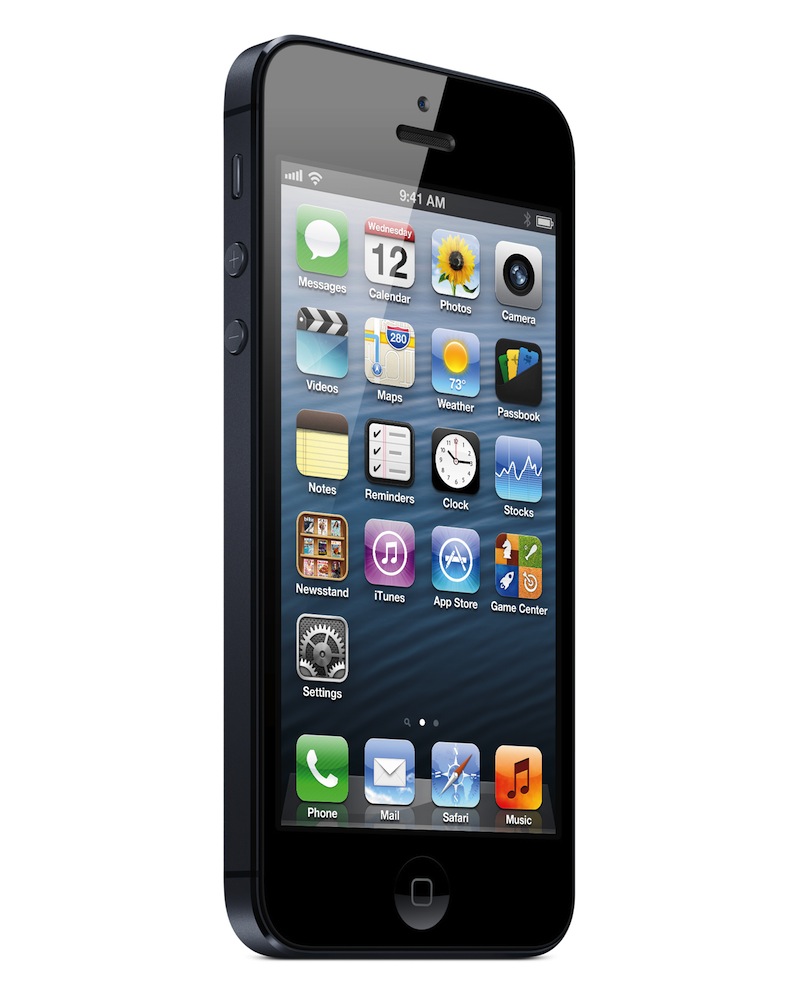 Apple’s Phil Schiller took the stage today at Apple’s media event in San Francisco to officially unveil the iPhone 5, Apple’s major upgrade iPhone family. As widely rumored, the iPhone 5 features a taller display to visualize more content, a thinner profile, and a new metal backplate. While similar in the overall aesthetic to the iPhone 4 and iPhone 4S, the changes made to the iPhone 5’s body construction, display, and glass design represent a major change from the industrial design first introduced in 2010.

Made entirely of glass and aluminum, Phill Schiller described iPhone 5 as the “most beautiful product Apple has ever made”. iPhone 5 is 18% thinner than the previous generation, with a profile of just 7.6 mm in an anodized aluminum body and “diamond cut chamfered edges and glass inlays”. It is 20% lighter than the iPhone 4S, and Schiller says iPhone 5 also is the world’s thinnest smartphone.

iPhone 5 is the most beautiful consumer device that we’ve ever created,” said Philip Schiller, Apple’s senior vice president of Worldwide Marketing. “We’ve packed an amazing amount of innovation and advanced technology into a thin and light, jewel-like device with a stunning 4-inch Retina display, blazing fast A6 chip, ultrafast wireless, even longer battery life; and we think customers are going to love it.

iPhone 5 weighs 112 grams, and features a Retina display at 326 PPI. With a resolution of 1136x640 pixels, iPhone 5 has a 16:9 aspect ratio and a 4-inch display. According to Schiller, this is a right size that should fit comfortably in the user’s hand.

By making the screen taller, not wider, iPhone 5 is just as easy to use with one hand so you can tap, type and scroll the same way you always have

Obviously, every Apple app has been updated to take advantage of the new display: more events are shown in Calendar, more content is displayed in Safari, and more messages are shown in Mail. While every Apple app has been updated, third-party apps that aren’t specifically targeting the new screen size will be “letterboxed” – placed at the same size in the center of the screen with black borders on either side. Various third-party apps, such as CNN and OpenTable, were used as examples of developers using the new iPhone’s screen to show more content. 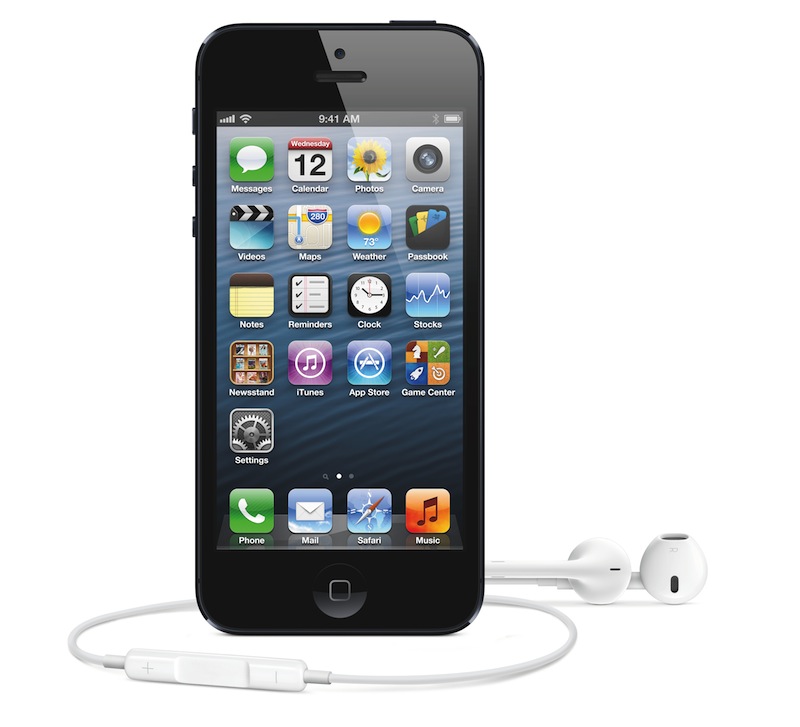 The new iPhone’s screen allows for widescreen video, and it’s also a huge technical accomplishment for the company. Firstly, it comes with 44% more color saturation; second, touch sensors have been integrated directly into the display itself, removing a layer to make the display sharper and, according to Schiller, the world’s most advanced one as well.

As rumored, the new iPhone comes with a new wireless networking system. HSPA+, DC-HSDPA, and LTE have been added to iPhone 5, which supports 7 different bands from GPRS to LTE. iPhone 5 uses a single chip for voice and data, and a single radio chip. For LTE, various carriers around the world will be supported, included AT&T, Sprint, and Verizon in the US, Rogers, Telus, and Bell in Canada, and many others around the world.

The iPhone 5 comes with a brand new A6 processor that’s twice as fast as the A5 of the iPhone 4S, but 22% smaller. Almost every functionality, from launching Pages or Music to viewing presentation attachments or saving images is now twice as fast on average. 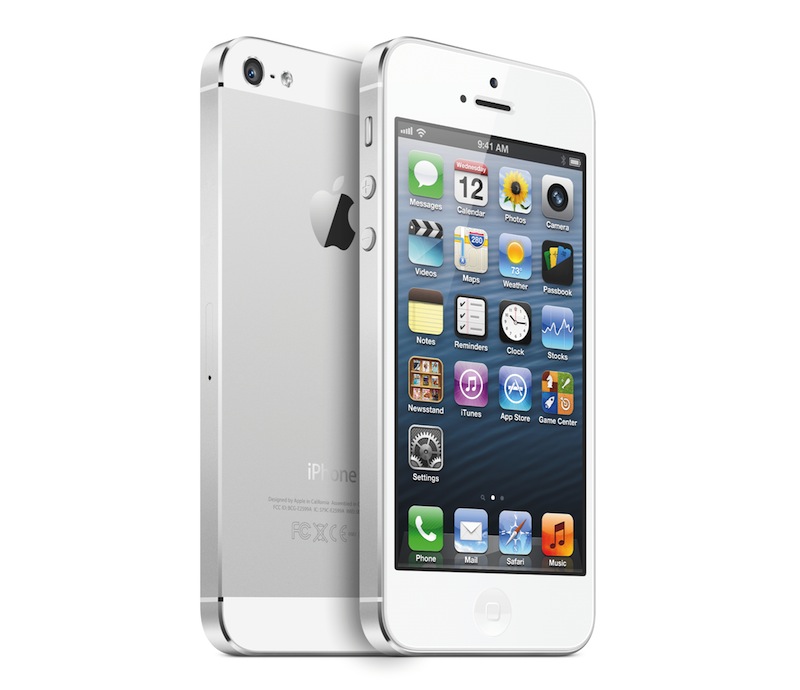 The camera of the iPhone 5 is an improved iSight camera. It is 25% smaller than the 4S’ camera, yet better. It has an 8 megapixel sensor shooting pictures at 3264x2248 with backside illumination, hybrid IR filter, 2.4 aperture, and a five-element lens. The new iSight camera features a dynamic low light mode, precision lens alignment, and a sapphire crystal. Thanks to the A6 processor, photo capture is faster, low-light conditions see better performance, and, in general, the entire processing has been vastly improved. On stage, Schiller said photo capture is 40% faster on the iPhone 5.

A new feature of the iPhone 5 with iOS 6 is Panorama mode. Previously spotted in old iOS 5 betas, panorama mode allows you to composite widescreen photos to create seamless transitions between them and obtain a single image as a result. In a slide on stage, Schiller showed an image that went up to 28 megapixels thanks to Panorama mode.

The new panorama feature lets you capture everything from a family reunion group photo to a jaw-dropping shot of the Grand Canyon. With one smooth motion you can shoot up to an impressive 240 degrees. The gyroscope, A6 chip, and Camera app work together to create one seamless, high-resolution panorama up to 28 megapixels. 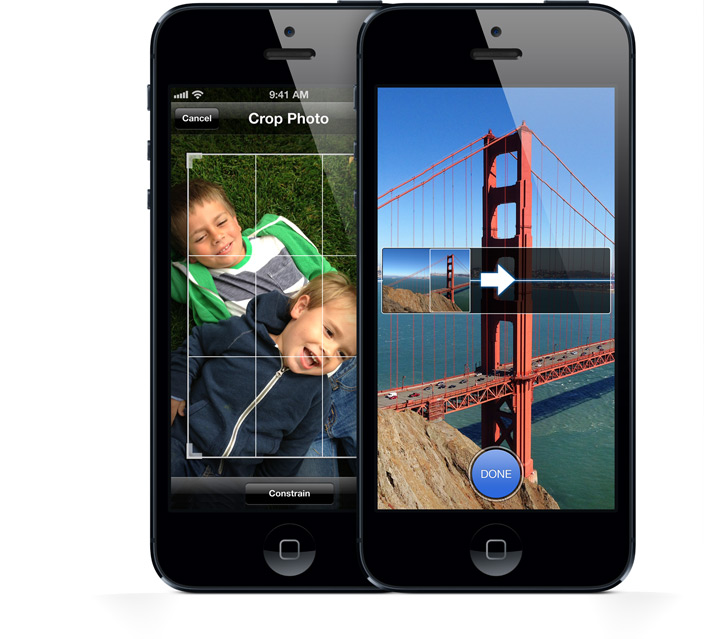 The audio system has been improved, too. There are now three microphones: one at the bottom, one in the back, one at the front of the device. The speaker design has been improved, and the component is now 20% smaller. With a noise-cancelling earpiece and wideband audio, Apple is looking to dramatically improve audio quality on the iPhone 5.

As widely expected, the iPhone 5 features a smaller dock connector. Called “Lightning” (which plays nicely with “Thunderbolt” on the Mac), it is 80% smaller, has an all-digital, 8-signal design, and should feature “improved durability”. 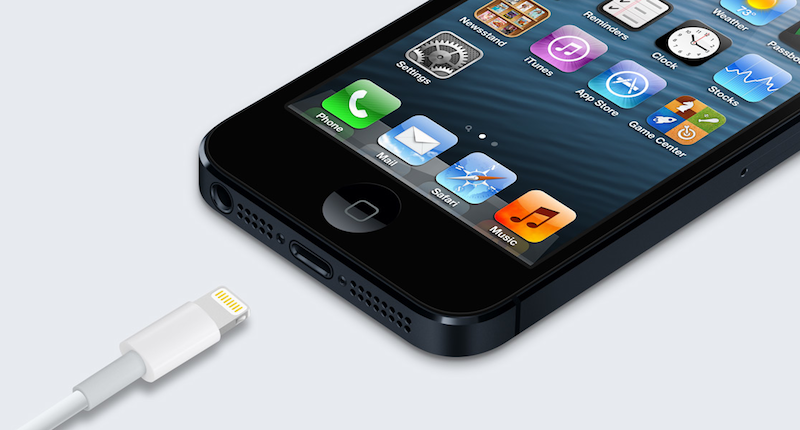 As also expected, Apple has built an adaptor to make sure old accessories will keep working with the iPhone 5. 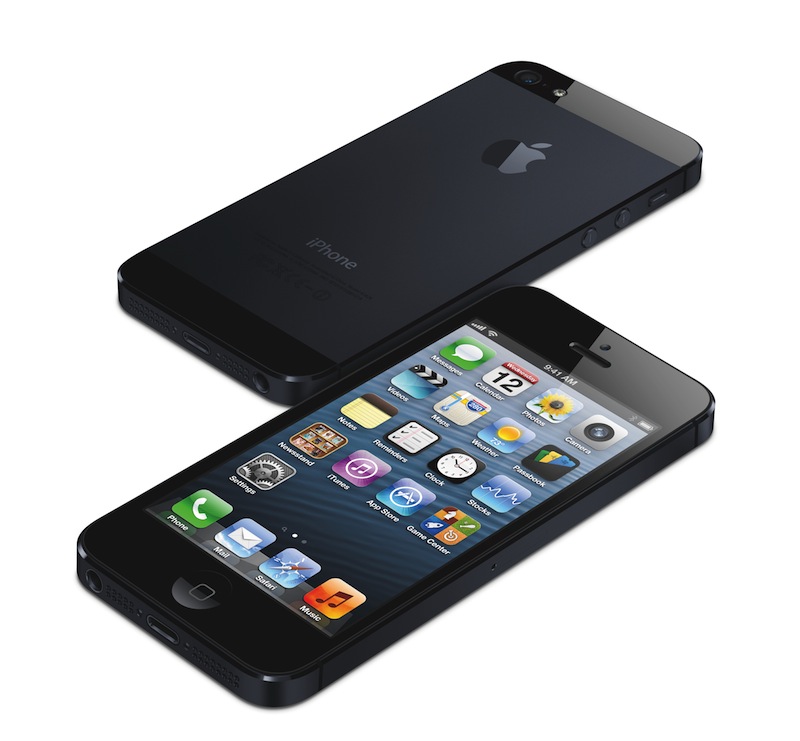 After a demo showing the features of iOS 6 (our complete overview from June), a promo video was rolled showing the new features of the iPhone 5 again. According to SVP of Industrial Design Jony Ive, “it took an incredible effort” to redesign the iPhone and change its screen size. Apple takes the iPhone’s form factor very seriously, and that is why the device went through countless iterations to achieve the kind of hardware and software integration Apple prides itself upon. As Ive said in the video, iPhone 5 has a level of fit and finish that doesn’t match any other product done by the company before. 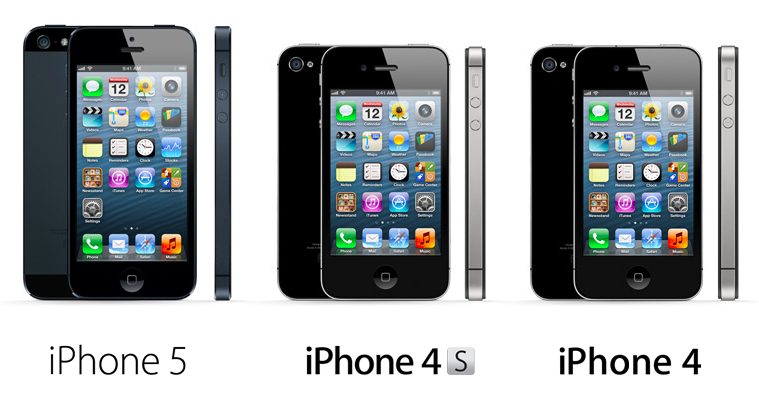 Apple wants to target every price point with the best prices and devices.

iPhone 5 pre-orders will start this Friday, September 14th. The device will ship on September 21st in:

Apple is targeting 100 countries and 240 carriers by December 2012. iOS 6, as previously rumored, will come out on September 19th.

First “Hands-On” from the Web

Dave Hamilton has a nice first hands-on photo of the iPhone 5. 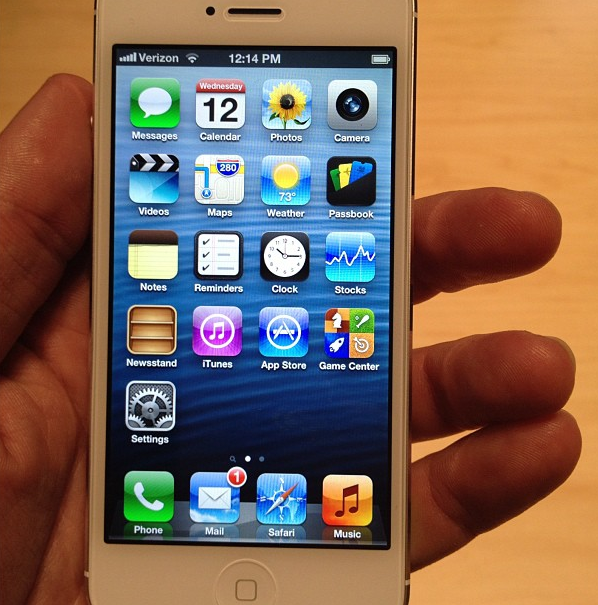 The Verge has some good first shots as well. According to Joshua Topolsky, build quality of the device is very good, and the A6 processor makes the iPhone 5 feel snappier.

The iPhone 5 is still a sturdy and solid-feeling device, despite the weight loss. The back is primarily a slab of machined aluminum — as are the sides — but just as we saw in the leaks there are two strips of glass along the top and bottom of the device. These strips feel identical to the glass that drapes over the entire face of the device. 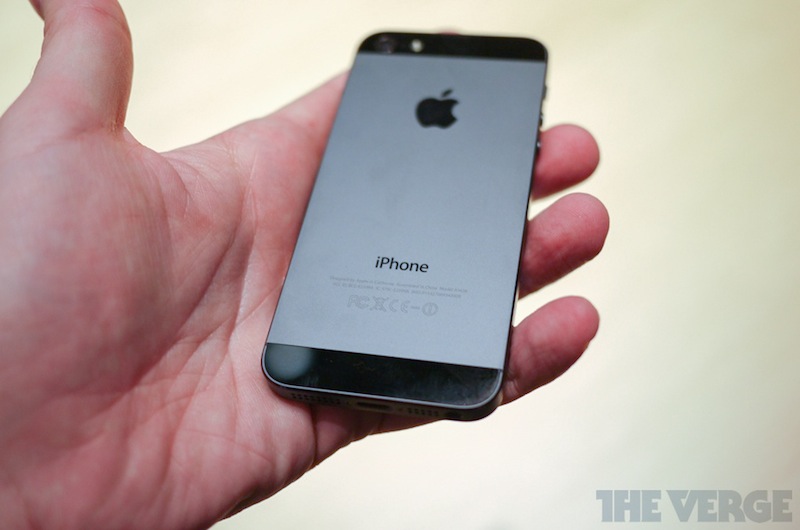 AnandTech has photos, and a video. 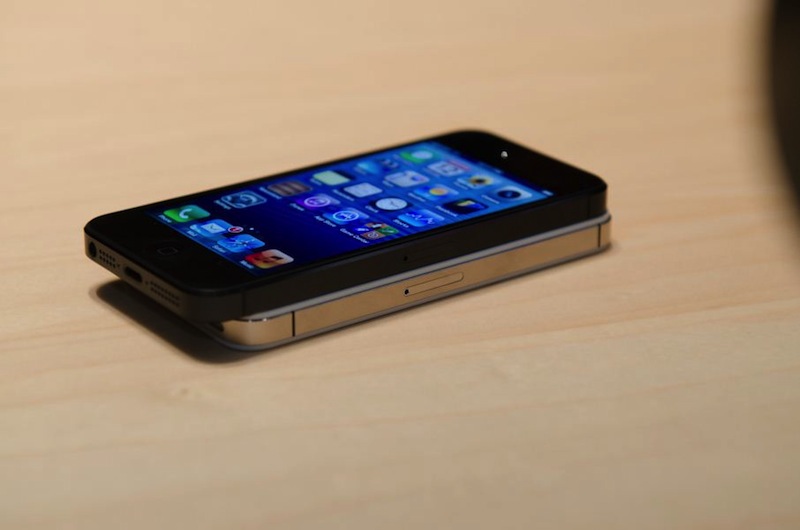 And Engadget has posted a first gallery of photos as well. 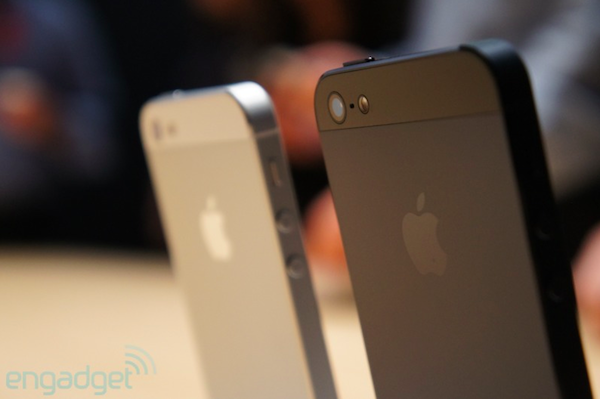 Slashgear has a series of great photos and some detailed first impressions of the device. According to the website, the device running near-final iOS 6 software is snappy, responsive in navigating pages and launching apps, and very comfortable. They couldn’t save photo tests from the camera, but they were impressed by what they saw at the hands-on area.

Gripping it, your thumb is able to navigate the full length of the display without stretching, just as promised, and while it’s undoubtedly a light handset it doesn’t feel delicate. We loved the Retina Display in the iPhone 4/4S, but the iPhone 5 trumps both: it looks somehow crisper and cleaner, and it’s bright, even under the lights of Apple’s demo area. The anti-glare coating certainly helps there. 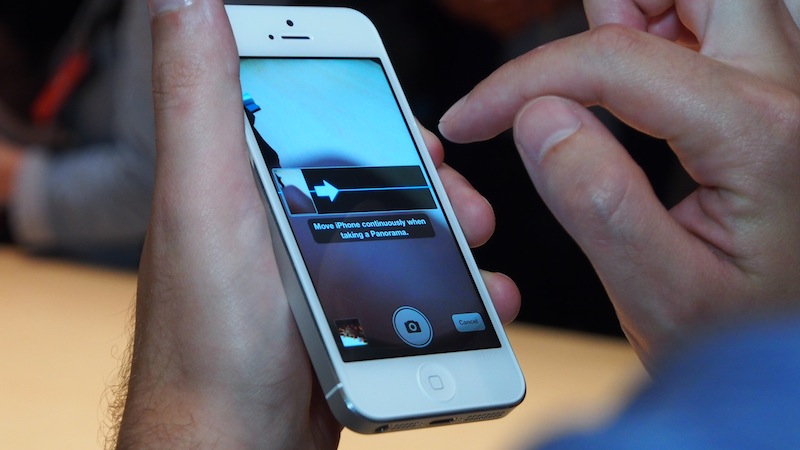 More hands-on videos are now surfacing on YouTube from San Francisco, also comparing the iPhone 5 to the iPhone 4S.

The iPhone 5 has a new box design.

Below, a chart comparing the iPhone 5 to previous iPhones. 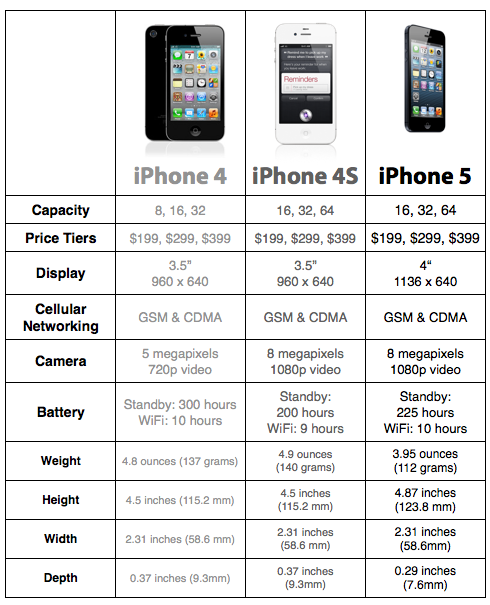 A link to Apple’s official press release is available here.

The “Lightning to 30-pin Adapter” is now available for $29 here. It ships in October.

As noted by Shawn Blanc, the new iPhone’s website is responsive to vertical height.

Panorama is also listed as a feature for the iPhone 4S.

Via The Firemonkeys, here’s the first official screenshot of Real Racing 3, announced and demoed today on stage. 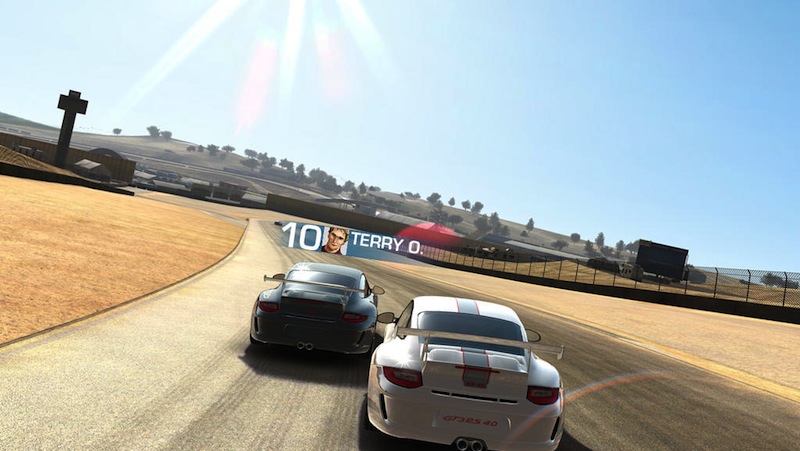 Apple is detailing LTE support for the iPhone 5 in this webpage.

Apple’s Design webpage for the new iPhone 5 is full of interesting details about the construction of the device and the EarPods, the new earbuds Apple also announced today.

On the new integrated touch screen:

Apple engineers accomplished that by creating the first Retina display with integrated touch technology. Which means instead of a separate layer of touch electrodes between display pixels, the pixels do double duty — acting as touch-sensing electrodes while displaying the image at the same time.

On aluminum and glass inlays:

Take the glass inlays on the back of iPhone 5, for instance. During manufacturing, each iPhone 5 aluminum housing is photographed by two high-powered 29MP cameras. A machine then examines the images and compares them against 725 unique inlays to find the most precise match for every single iPhone.

Apple engineers asked more than 600 people to test over 100 iterations of the Apple EarPods. Testers ran on treadmills in extreme heat and extreme cold. They performed various cardio workouts. They were even asked to shake their heads side to side, up and down. The result: Apple EarPods provide stronger protection from sweat and water, and they’re remarkably stable in the ear.

Ergonomically, the taller phone means the average hand won’t be able to cover both antennas. It’s harder to hold “wrong”. Also, since LTE operates at a lower frequency, 700 MHz, the additional separation is even more valuable. The aluminum body of the new iPhone 5 will also help the antenna performance, and the hand sensitivity issue will be further diminished. The key word is sensitivity. In other words, changes in performance due to changes in “how you hold it” will be diminished. The antenna will see less change in the “ground mass” of the device.

On the iPhone 5, the software keyboard in landscape mode isn’t bigger, is simply stretched. Official shot:

And hands-on photo via @nerdtalker: 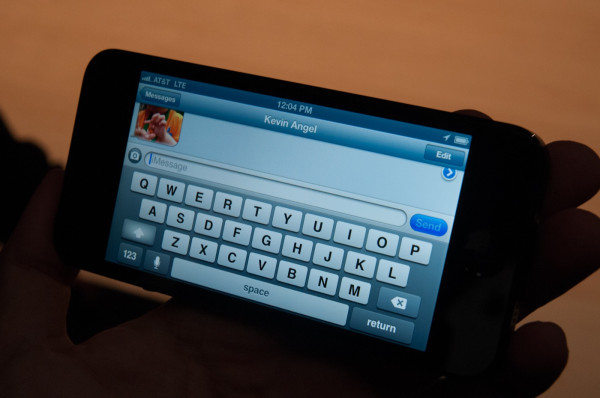 In an interview with All Things Digital, Apple’s Phil Schiller explained the iPhone 5 doesn’t feature NFC because “Passbook does the kinds of things customers need today”. There were some rumors that Apple may implement NFC technology in the new iPhone, but, clearly, Apple doesn’t see NFC ready for prime time just yet. Similarly, Schiller dismissed rumors of a wireless charging system saying that users would still need an inconvenient extra accessory to plug into a wall, confirming that the new Lightning connector is here for “many years to come”.

Below, a collection of the best tweets and links about Apple’s event we’ve saved during the day.