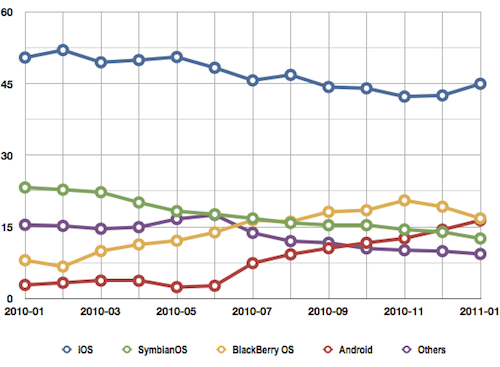 A report by RegHardware based on data from service StatCounter reveals that Apple’s iOS is still dominating the smartphone usage in Europe, in spite of its “gentle decline”. StatCounter isn’t of course installed on any website available on the internet, but it provides good indication of trends in the mobile space thanks to its 3 million tracked webpages.

Europe as a whole clearly favours iOS - its market share has run between 50 per cent and 45 per cent between January 2010 and January 2011 - which is well ahead of nearest rivals Symbian, BlackBerry and Android.

It’s no surprise to see the decline in Symbian usage - any more than it is to see the rise in Android mobile browsing, but BlackBerry usage certainly appears to have peaked, hitting 18 per cent and then falling back. And while Apple’s share is trending downward, it’s a very gentle decline.

UK stats provided by StatCounter also gives us a glimpse at the rapid increase of Android’s marketshare, while BlackBerry OS surpassed iOS’ web traffic in the last few months of 2010 in the UK. iOS and Android are clearly shaping up to be the two most important and relevant mobile platforms for years to come, with RIM’s BlackBerry and Nokia’s Symbian now left behind to generate lower numbers.

The number of tablets coming out in the next months running Google’s Android and Nokia’s adoption of Windows Phone 7 for its future handsets will likely affect the overall OS usage in the mobile environment, but analysts expect iOS to remain dominant throughout all 2011 with the release of the next-generation iPhone and an eventual price drop of the current-gen iPhone 4.