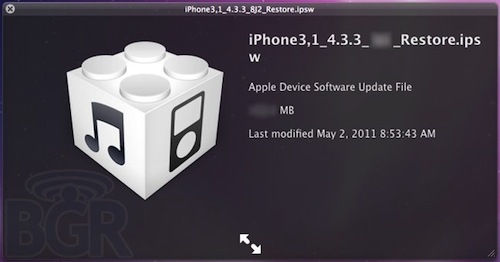 According to BGR, Apple is looking to roll out an iOS 4.3.3 update within two weeks and “possibly sooner” which, as previously announced, will improve the way iPhones and iPad 3G models handle the location database file required to quickly fetch nearby antenna and WiFi hotspot information.

We’ve been sent the OS and while we haven’t loaded it on our iPhone just yet, here is what we have been told it will address:

- The update will no longer back up the location database to iTunes.

- The size of the location database will be reduced.

- The location database will be deleted entirely when Location Services are turned off.

The website also reports iOS 4.3.3 will address battery life issues and introduce iPod bug fixes. On March 21st, BGR reported iOS 4.3.1 would be released within “one or two weeks” and they made a similar prediction for iOS 4.3.2, which came out on April 14th. Apple announced in its Location Tracking Q&A that an update coming out in the “next few weeks” would fix several bugs related to location tracking. With BGR posting a screenshot of the final firmware file, it’s very likely that Apple will release the update later this week.

Sometime in the next few weeks Apple will release a free iOS software update that:

- reduces the size of the crowd-sourced Wi-Fi hotspot and cell tower database cached on the iPhone,

- ceases backing up this cache, and

- deletes this cache entirely when Location Services is turned off.

In the next major iOS software release the cache will also be encrypted on the iPhone.

Update: as pointed out by one of our readers, the image above confirms build number of the new OS will be 8J2.