We’ve covered the headline details of all those announcements, but as always there are little things that we didn’t capture, or tidbits that others have uncovered since the event. That’s what this article is dedicated to, little interesting things that you may not have noticed yourself.

The Numbers from Tim Cook

Interspersed throughout the keynote, Tim Cook dropped a bunch of numbers, statistics and milestones (some new, some previously announced) that Apple has achieved, here they are:

Apple’s Adaptors for the new MacBook

The new MacBook comes with a single USB-C port (which is a new USB standard with a different port to the existing USB standard) and a headphone jack. That means you are pretty much out of luck if you want to use an existing USB cable, Thunderbolt, or HDMI cable with it out of the box. Fortunately Apple does sell a few adaptors to expand the new MacBoook’s capabilities. Unfortunately, like every Apple adaptor, they come at a rather insane price.

The Apple Watch will be water resistant, but not waterproof. Apple’s website says that you can use the Apple Watch “during exercise, in the rain, and while washing your hands, but submerging Apple Watch is not recommended”.

They further write that the Apple Watch has a water resistance rating of IPX7, which as Daring Fireball’s John Gruber notes, is 1 meter of submersion for up to 30 minutes.

Louie Mantia has put together a fantastic matrix that lists every Apple Watch case and every Apple Watch Band and highlights which combinations are available to purchase, including which ones you can technically achieve with an additional purchase.

Check it out here.

9to5Mac writes that Apple has begun sending an email to registered iOS developers, inviting them to test their WatchKit apps ahead of the device’s launch. It’ll be running from March 16 through to April 30 at Apple’s Sunnyvale campus in California.

As noted by Steve Streza, the iOS Apple Store app allows you to view the actual size of an Apple Watch on your iPhone’s screen. You can access it by tapping ‘Compare case sizes’ on the Featured page of the app.

The Apple Store app has actual-size mock ups of the two Watch sizes, which you can hold up to your wrist. pic.twitter.com/vFAPVNOZge

Apple provided more detail about how the Apple Watch will be sold to customers in its keynote. Essentially, they will be put on show inside wooden tables that are similar to the ones that were used at the two Apple Watch keynotes and other public appearances. 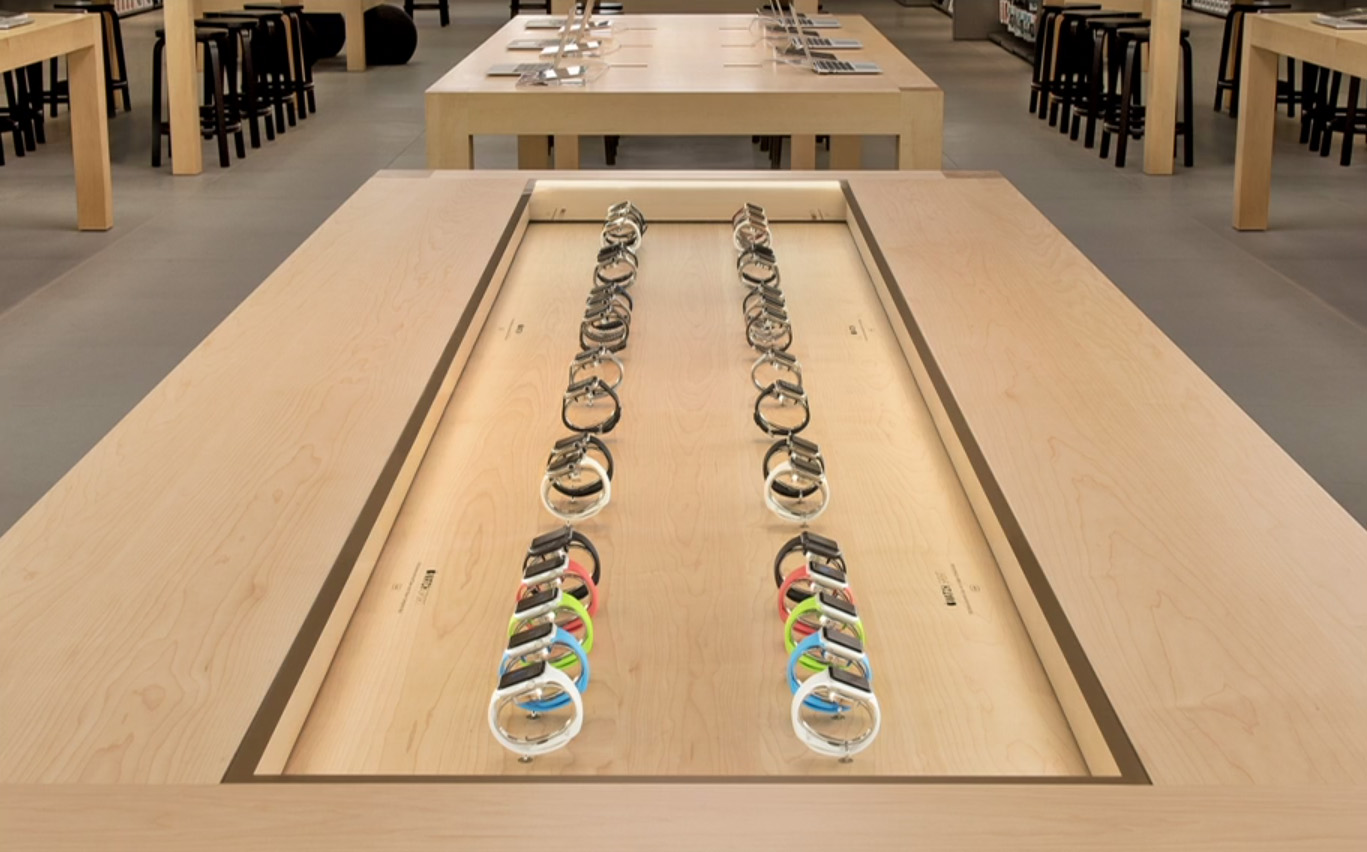 The Apple Watch will also be available to preview or try on at Galeries Lafayette in Paris, Isetan in Tokyo and Selfridges in London on April 10. When the Apple Watch goes on sale on April 24 it will also be available in those department store ‘shop-in-shops’, and at “boutiques in major cities across the world including colette in Paris, Dover Street Market in London and Tokyo, Maxfield in Los Angeles and The Corner in Berlin”.

Abdel Ibrahim had a look at how much the weight varied between Apple Watch Collection.

Have you seen anything else interesting that you think we should share with others? Tweet at me @greyham on Twitter or email me (graham [at] macstories.net)