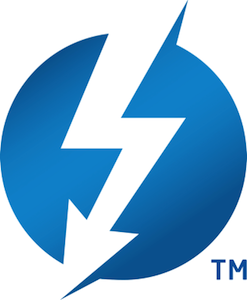 In recent days there has been confusion over who exactly owns the trademark to the Thunderbolt brand – it had been revealed that Apple had sent trademark requests for the Thunderbolt name despite Intel developing most of the I/O technology. Intel had developed what was formally known as Light Peak, a technology that would allow high-speed connectivity of up to 100Gbps using an optical cable. Apple had then suggested to Intel in 2009 to add the capability of 10 Watts of power and construct the cable out of copper instead.

The fact that Intel did not have ownership of the Thunderbolt brand trademark caused confusion amongst many, as a result, Bright Side of the News contacted Intel and asked them about the situation. The Senior Communications Manager at Intel, Dave Salvator responded and said

As part of our collaboration with Apple, they did some of the initial trademark filings.  Intel has full rights to the Thunderbolt trademark now and into the future. The Thunderbolt name will be used going forward on all platforms, irrespective of operating system.

Effectively what this means is that Apple did the original trademark work but will be transferring it back to Intel. But Apple won’t be leaving empty handed, they get in return unrestricted use of the technology. Others, such as Sony, which are planning to implement the Thunderbolt technology into their own upcoming laptops (using a USB-style port) will still have to resolve trademark disputes with Intel. Salvator also provided some clarification on the future of Thunderbolt moving towards the originally planned optical technology. He said that Intel is working now on the design of the optical version and that

The (Thunderbolt optical) cable could carry power in the same cable (running next to optical part of cable), but exact product plans are still to be announced.

[Via Bright Side of the News]