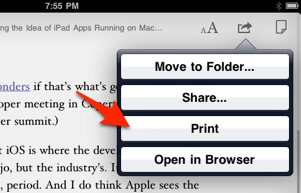 Developer Marco Arment has been working hard on improving Instapaper since he quit his job at Tumblr to work fulltime on his reading platform. Instapaper 2.3 was released two weeks ago with speed improvements and OmniFocus integration, version 2.3.1 (released last night) adds AirPrint support for iOS 4.2.1 users and introduces a redesigned sharing interface that shows icons for Instapaper-compatible apps.

Unfortunately, this update also comes with a bug on iPads running iOS 3.2.x that will cause the app to crash. A fix has already been submitted to Apple and should be available soon.

Instapaper is available at $4.99 in the App Store.Full changelog below.

- Added a map to the auto-dark-mode setting if location-sensing fails so you can manually set your location.

- Added app icons to Share panel. (With nice gray ones for dark mode.)

- Fixed several interface bugs, including the gray-square bug and the accuracy of the scroll indicator on iPad.