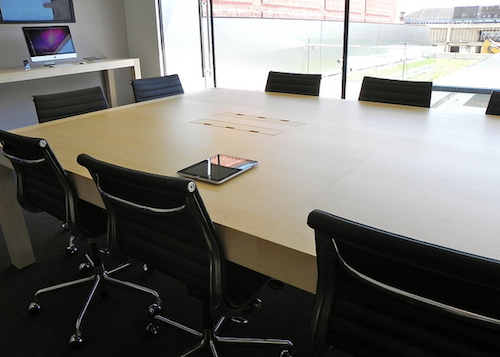 Apple is having its well deserved success among enterprises and corporations alike, some say without even having a dedicated salesforce, but apparently that doesn’t stop the company from discussing iOS devices and Macs with interested business users in the so-called Briefing Rooms. What’s a Briefing Room, you ask? It’s a super-exclusive conference room that comes with high-end Mac gear, iPhone and iPad-controlled presentation monitors, large glass windows and lots of iPads on the table. The Briefing Room is typically located inside an Apple Store, but away from the chaotic showroom where consumers check out the latest iPhones and Mac accessories.

It appears that there are only five of these briefing rooms in the world, and Pioneer Press reporter Julio Ojeda-Zapata managed to interview Apple’s Vice President of retail operations in the one located in the Uptown Apple Store in Minneapolis. In the past year, Apple opened other Briefing Rooms to lure business customers:

Apple has also opened Briefing Rooms in retail stores in London, Paris, Philadelphia and Shanghai. The secluded spaces are intended to whisk small-business executives and technology coordinators away from the often-cacophonous consumer showroom for heart-to-hearts about how Apple can meet their needs (and get them to drop megabucks on shiny Macs and iOS devices, of course.)

It sounds intriguing, if you ask me – and personally, I’d be curious to know the apps that run on those iPads to power conference note-taking and management. You can check out the full Flickr set here, and the original blog post on Pioner Press here. [via TUAW]