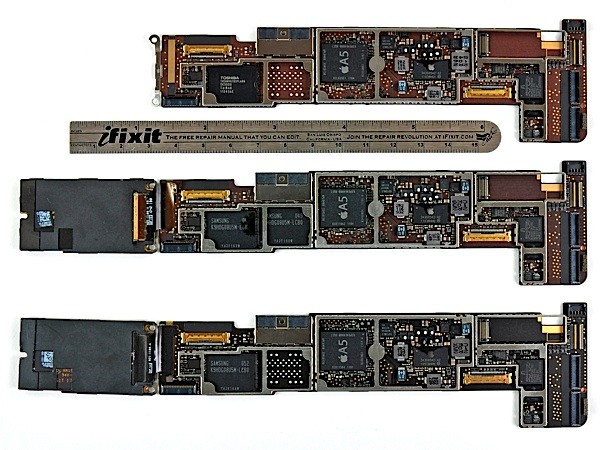 If you’ve been intrigued by what exactly is different between the WiFi, GSM (AT&T) and CDMA (Verizon) versions of the iPad 2, well iFixit has you covered yet again with some very nice comparisons of the internals of those three base models. The above photo shows you the logic board of the three (WiFi up top and 3G below the ruler) but iFixit also documents the other key vitals of the iPad 2 on their site from the various antennas, 3G chips and the headphone jack.

The key differences to note are that the CDMA model has an additional antenna compared to the GSM variety and it also uses a Qualcomm Gobi dual-mode radio with integrated GPS that actually supports both CDMA and GSM, but the GSM compatibility is unused by the iPad. As for the GSM models, they use an Infineon GSM chip and a Broadcom GPS chip. Interestingly the hardware for both the CDMA and GSM iPad 2 follows the iPhone 4, in which the GSM versions used that Infineon and Broadcom chips whilst the Verizon CDMA version used the single Qualcomm one.

Want to see more? Jump through to the iFixit site and don’t forget to have a look at the full iPad 2 teardown and Smart Cover teardown that they also did earlier this month.