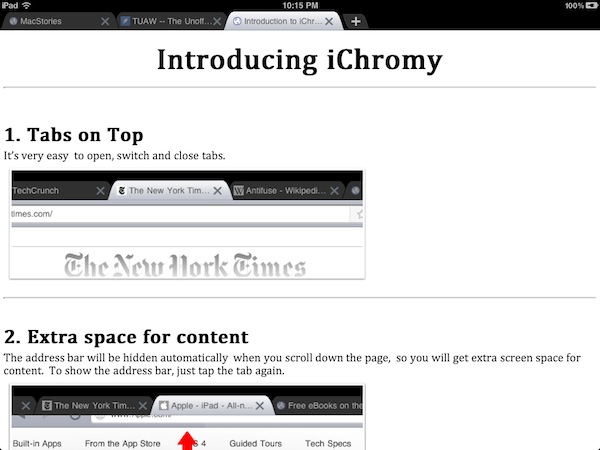 Released earlier today for free on the App Store and developed by the same folks behind web-based bookmarking service Diigo, iChromy is a new third-party iPad browser that aims at bringing the Google Chrome experience on the tablet, obviously without using Chrome’s underlying Chromium open-source project, which can’t be implemented by developers due to Apple’s restrictions. From the name of the app to the iTunes description, the developers of iChromy don’t hide their intentions of developing a heavily Chrome-inspired browser for the iPad; while it still might not look as beautiful as this mockup, I took the app for a quick spin to see whether Chrome (which I love and use on my Mac desktop) could have a proper, unofficial, lightweight counterpart on the iPad.

iChromy is free and the developers will likely introduce a Pro version with more features and deeper Diigo integration in the future, but right now what we have is a simple iPad browser that lacks several must-have functionalities (most of them also available in Safari and not necessarily in powerful alternatives like iCab Mobile) but it’s got tabs on top, a Lion-like Reading List (with the same eyeglasses icon) and decent memory management. More importantly, iChromy has an Omnibox that allows you to search and type addresses in the same bar, like Chrome. So while tabs on top and the Omnibox make for a nice Chrome-like experience that reminded me why it’s still possible to innovate in web browsers on any device, iChromy falls short in the details: you can’t re-arrange tabs, you can’t tap on the status bar to scroll a webpage to the top, you can’t pin tabs. The Omnibox is really, really nice, but the app’s keyboard doesn’t have a .com button and there’s no way to get search suggestions or modify the default search engine. Bookmarks and history are displayed in the Omnibox, but the lack of the .com button on the iPad’s soft keyboard is annoying. Similarly, you can create bookmarks by hitting the “star” button in the Omnibox, but you can’t organize these bookmarks in folders, sync them back to the cloud or import / export them. The Reading List, however, works fairly well in the way it makes entire webpages available offline. Too bad it doesn’t sync anywhere else either, which comes as a surprise considering Diigo’s cloud-oriented nature.

In spite of its missing features, I can’t say iChromy isn’t “nice” in how it mimics Chrome for Mac. The browser is very lightweight, it never crashed on me with multiple pages open in the background and, personally, I think it’s always great to see a browser with tabs on top (I was a huge fan of Safari 4 beta, until Apple killed that magnificent tab implementation). Overall, I see Chromy as an interesting experiment that a) needs some obvious adjustments like the .com button, top scrolling and search suggestions and b) with an upcoming Pro version could have a chance to become a Chrome-inspired, powerful competitor to my personal favorite iCab. We’ll see. In the meantime, go download the app here.