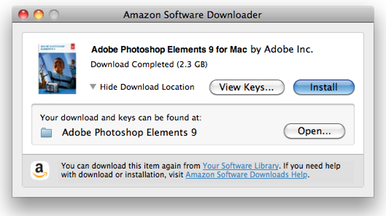 Yesterday, Amazon launched a software store for Mac applications that, using the online retailer’s usual interface to browse and buy products, allows users to purchase apps and download them on their computers without waiting for a boxed copy to arrive. In what it sounded like Amazon’s response to the Mac App Store, which as of today counts thousands of apps available from all kinds of developers, we noted Amazon’s new store launched to roughly 250 titles, and didn’t allow independent developers to submit their apps for release, as the company apparently only worked with existing large sellers (like Adobe and Microsoft) to make their applications available digitally.

Whilst the initial impression was that Amazon’s store couldn’t compete with the ease of use of the Mac App Store but competition is always good (especially when it comes to software deals), Dan Frakes at Macworld took the Mac Download Store for a spin, and it turns out the download and installation process might be worse than expected. First off, Amazon lets you save a direct link for later in your software library, but what you get when you decide to get a new app onto your desktop is not a .dmg file or an .app – Amazon gives you an additional “app downloader” to download the actual app on your Mac:

This is where the process gets quite a bit less convenient than buying through the Mac App Store. The first thing you actually download is a small disk image (2.1MB in size, in my case) containing an application-specific [Software Name] Downloader program. Open this disk image, if your browser doesn’t mount the image automatically, and double-click the Amazon Software Downloader.app inside. After a few seconds, the Downloader program begins downloading the purchased software—not to your Downloads folder, or even to your Applications folder, but to a new folder on your Desktop.

There’s more. When trying to install Photoshop Elements with Amazon’s downloader, Frakes ended up with a new .dmg and he had to figure out by himself what to do with it:

Obviously, it’s possible that Adobe chose a convoluted process and other apps will come with an easier installation method. However, the fact that a separate downloader needs to run in order to get the stuff you bought online seems to be the norm. Personally, I wasn’t really expecting Amazon’s new Mac store to offer the same experience of the Mac App Store (which, small bugs aside, truly is the best way to discover, install and recover Mac apps), but reading Dan’s article makes me wonder how many average and “geek” users will choose this over Apple’s own store or even a boxed copy just for some small discounts or the fact that you can pay with your existing Amazon account. Make sure to read the entire post to know more about the post-installation and, more importantly, how Amazon handles licenses and software keys on multiple computers.