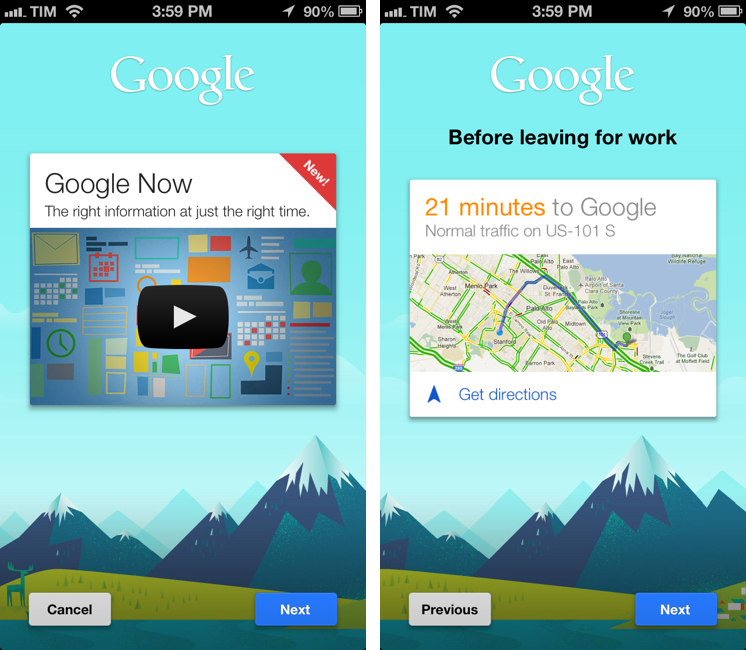 Last month, it was rumored that Google would release Google Now for iOS through an update to its existing Search app for iPhone and iPad. Version 3.0 of the app, released today on the App Store, indeed adds Google Now functionality by displaying weather and traffic data, updates on sports teams and “breaking news”, and more directly within the iOS app.

Upon firing up the new app for the first time, you’ll be greeted with a walkthrough showing a video with a summary of Google Now’s functionalities, as well as a set of “cards”. Google Now is, in fact, based on tiny widgets that, by looking into things like your Google Calendar and current location (using WiFi), will display smart pieces of information about your upcoming schedule, traffic conditions to get to a location, currency conversion rates, weather forecasts, and more. Google Now wants to be a smart assistant by parsing and combining information from your Google account to offer an experience that, unlike Siri, tries to proactively predict what you’re going to do. 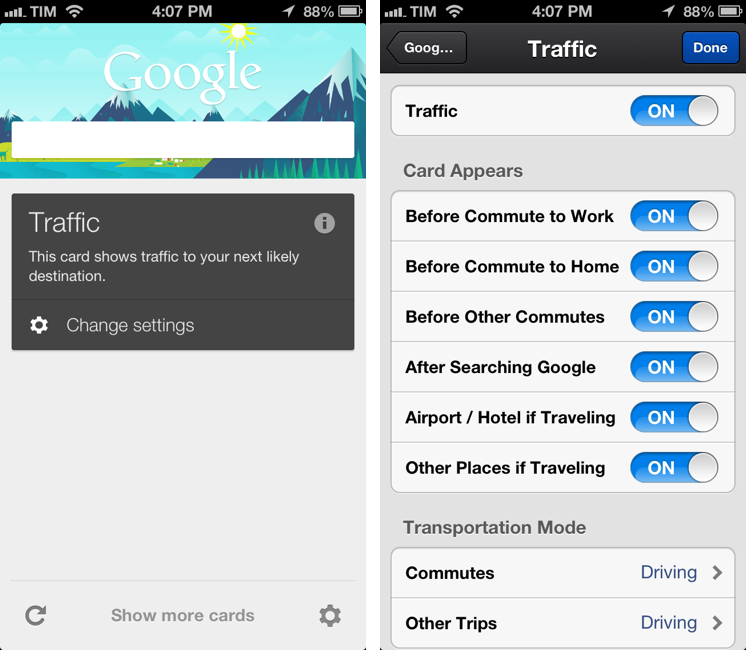 In my first tests, launching Google Now for the first time initially displayed a “Check back soon” alert saying that more cards “will appear when the time is right”. Therefore, I went to look into the Settings where, unsurprisingly, Google lists the type of cards Now can display; by default, all the following cards were set to “On”: 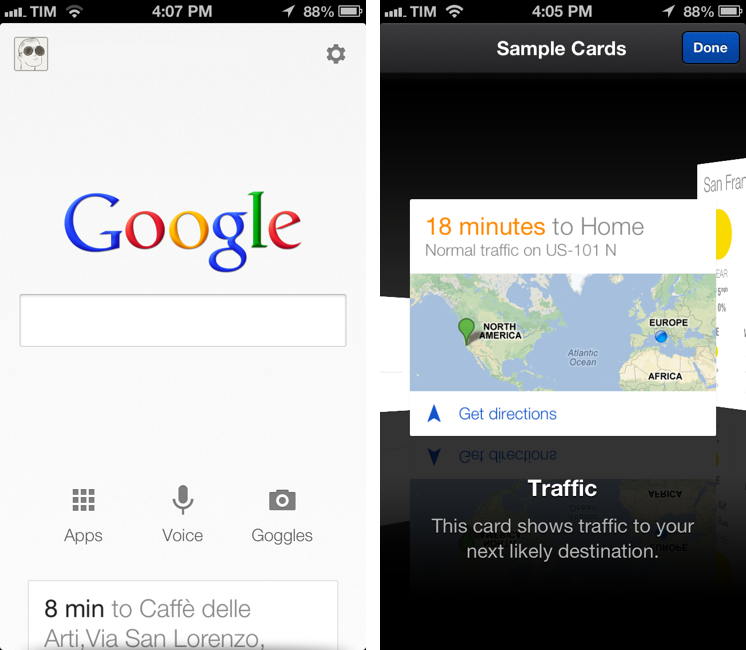 After the addition of a couple of events in Google Calendar, upon relaunching Now I was presented with a first card showing the location of my next appointment alongside commute time, which was accurate. Cards are shown directly below the search bar in the main page of the app, and swiping up to reveal them delightfully fades in an illustrated background at the top, moving and resizing the Google logo at the same time. Cards are interactive: you can swipe them away to hide them, or, in my case, tap on the “Get Directions” link to open the Google Maps app in directions view.

The Traffic card also comes with an “i” button that you can tap to flip the card over and change its settings. Google Now says that “the traffic card shows traffic to your next likely destination”; you can tap the cog icon to access a Traffic setting screen with several options. For instance, you can choose whether the card should appear before you commute to home or work, or if the transportation method for commute should be driving, public transit, walking, or biking.

I then went back to the main screen, hit the Now refresh button, and I was given a similar, yet different “Calendar card”. This one showed a Google Calendar appointment with time and directions; the card’s settings came with options to show the next appointment, and deciding whether the card should appear “for any meeting”, “only if far way”, or “in evening for next day”. 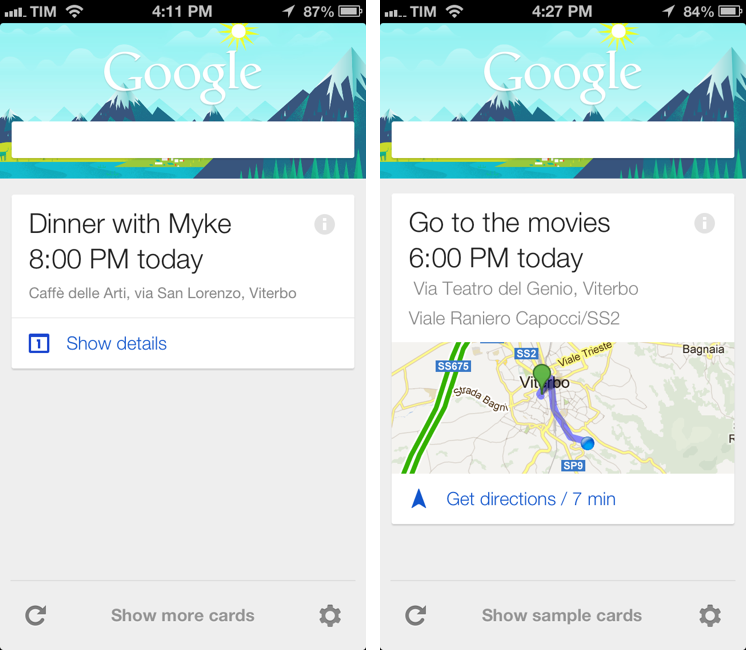 Right now, the amount of information displayed in my Google Now is limited, but I’m already hearing that, for other users, the app immediately found data such as Amazon tracking numbers stored in Gmail. And this is the whole point of Google Now: it needs access to information stored in your Google account to be useful. The more you use Google – and thus the more ads you see – the better Now will perform with schedules, locations, emails, and names of people to collect, parse, and present data in a way that Siri still does not support.

I will save further thoughts for when I’ll get the chance to properly try Google Now: more than Siri, I believe Google Now as a “learning service” directly integrated with your Google account needs time to prove its real utility (but I’m sure accounts rich of calendar events, location names, birthdays, and sports information are already working nicely with Now). This is also confirmed by Google Now’s Product Management Director Boris Gultekin:

As you use those products more, Google Now will have more chances of understanding what your information needs are,” Gultekin adds. “Also, as you use the product more we’ll learn what types of contents you find valuable and tune the product, it’s a nice virtuous cycle.

In February, I wrote:

I still believe that Siri’s biggest advantage remains its deep connection with the operating system. Siri is faster to invoke and it can directly plug into apps like Reminders, Calendar, Mail, or Clock. Google can’t parse your upcoming schedule or create new calendar events for you. It’s safe to assume Apple’s policy will always preclude Google from having that kind of automatic, invisible, seamless integration with iOS.

To use Google Now for iOS, you have to open the Search app and wait for a refresh. There are no notifications (though Google is “investigating them”), no system-wide shortcut to launch Google Now, and, obviously, no direct hooks into native iOS apps like Reminders and Mail. Google Now is a service meant for daily Google users who, on iOS, will have to cope with the app’s limited sandbox.

I’ve always found Google Now to be a powerful concept that, according to people who have been using it on Android, works very well. As it stands now, Siri and Google Now have two different implementations; after months of sporadic Siri usage, I look forward to using Google Now on a daily basis and seeing how it’ll perform.

Google Now is available in an update just released on the App Store.