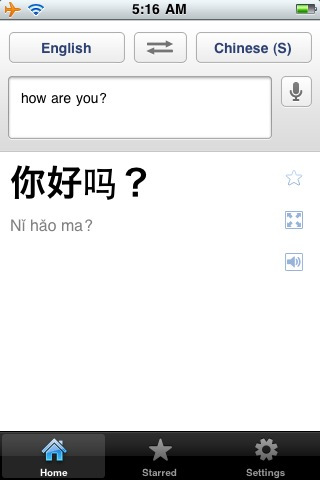 A few minutes ago Google announced the availability of the official Translate app for iPhone. Built on top of the HTML5 webapp  that’s been around for quite some time now, the native application allows you to “speak to translate” in 15 different languages with output translation supported up to 50 languages. You can listen to your own translations spoken out loud by the app , enable full-screen mode to get a larger view of the translated text (that’s quite useful) and even check on single words dictionary entries from within the app. The interface design resembles most of Google’s apps for iOS – nothing exceptional to note there. It’s got a clean and minimal UI.

Google Translate for iPhone is a better version of the popular mobile-optimized webpage packed into a useful package for iOS that comes with a few additional features. It’s a free download in the App Store. Full list of supported languages below.

With Google Translate you can:

* Translate text between 57 languages
* Translate by speaking the text instead of typing it (15 languages)
* Listen to your translations spoken aloud (23 languages)
* Display translations in full screen mode to make it easier for others nearby to read
* Star your favorite translations for quick access even when you’re offline
* Access your translation history even when you’re offline
* Spell out the translation of non-Latin script languages (e.g. Chinese, Japanese, etc..) in Latin characters to read it phonetically (e.g. Pinyin, Romaji)
* View additional dictionary results for single words or short phrases

Translations between the following languages are supported: