Rumored for the past few months, Google has today announced its new unified messaging system for iOS, Android, and web called “Hangouts”. A free service that includes text, photo, and video messaging, Hangouts is a rebrand of Google’s former video-chat service for Google+. The new Hangouts will unify Google Talk and Google+ messages under a single service, storing conversations in the cloud.

With Hangouts, users will be able to access their full history of conversations on any device, an option that can be turned off. While other messaging services such as WhatsApp, Apple’s iMessage, or Facebook Messenger focus on either text or static media, Google promises to leverage its experience with Talk and Google+ to provide a solution that encompasses all kinds of messages, including live video. Another key aspect of Hangouts, demoed at Google’s I/O conference earlier today, is the possibility of syncing notifications across devices: instead of buzzing multiple devices for a message that’s already been read somewhere else, Google will try to sync every Hangouts notification on mobile devices and the web (Hangouts is also available through Google+ and Gmail). 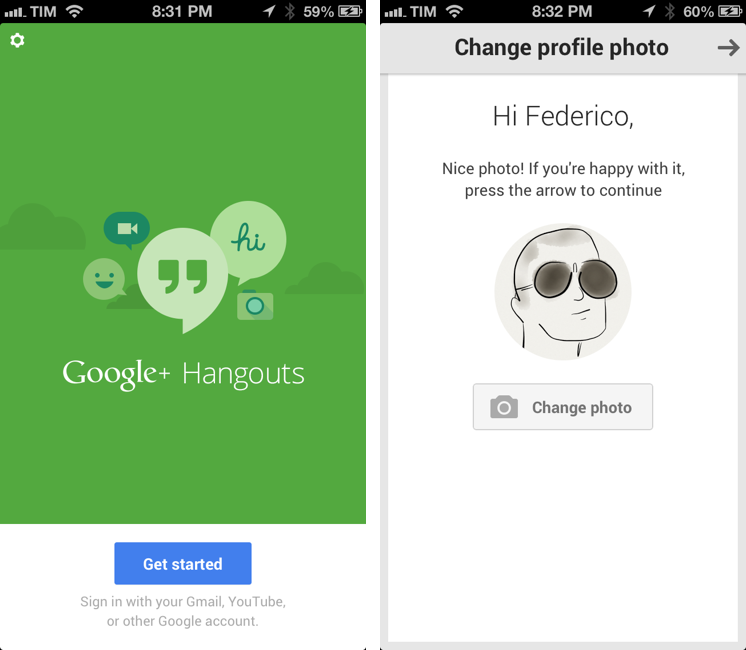 The Hangouts app for iOS is Universal and available on the App Store. I have been able to try the app for a few minutes with the rest of the MacStories team. Once installed, the app will ask you to log into your Google account; on my iPhone, I was also asked to confirm my phone number (a process that worked similarly to how WhatsApp handles it) and grant access to my iOS contact list.

The main screen of the app features a New Hangout menu for picking people that you want to hang out with. The Hangouts app is integrated with Google+, so you’ll be able to find people by typing names, email addresses, phone numbers, or the name of a circle they’re in. The app seems to understand who your most important contacts are – they are displayed at the top of the New Hangout screen.

Messaging in the iOS Hangouts app has, so far, some pros and cons. Messages come in and go out fast, with profile pictures displaying a typing indicator and acting as a shortcut to a person’s profile. Each hangout can be renamed, and the title bar will reflect the custom name alongside the number of participants. A great feature of Hangouts is that you can add more people during an ongoing conversation – something that iMessage notoriously lacks – by heading to the Hangout Settings. You can also mute notifications for single hangouts (a feature that’s on my iOS 7 wish list), view a list of all people chatting, archive a hangout, disable its history, and leave it. The app’s settings reveal more welcome options: you can snooze notifications (from 1 to 72 hours), block people, manage hangout requests, and add multiple accounts. 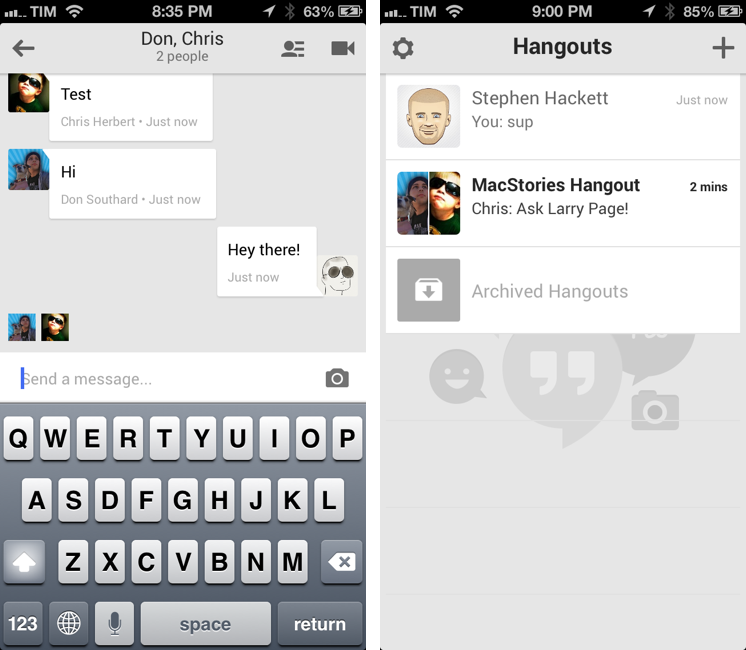 In using Hangouts for our MacStories team chat, we immediately stumbled upon two interesting limitations of this first version. Initially, we weren’t able to tap on URLs – a strange omission considering Google’s recent focus on letting its apps open web links with Chrome. The issue was exacerbated by the fact that, because messages from the same person are stacked inside the same chat bubble if sent in rapid succession, it’s not easy to manually copy URLs either. In other tests, I was able to paste tappable URLs, and the Hangouts app asked if I wanted to open them in Chrome or Safari (there’s no option to set a default browser for now). My guess is that there are some initial issues with URLs and Hangouts, as – at least for our team – links aren’t always clickable on either iOS or the web.

The second missing feature we promptly noticed is that, unlike Messages, Hangouts isn’t animating GIFs inline. (As an aside, the use of Roboto instead of traditional iOS Helvetica is peculiar, but in line with Google+)

Hangouts is also available as a Chrome extension, but the experience is limited to desktop popups that rely on Chrome notifications. At the moment of writing this, I don’t have access to Hangouts’ revamped interface on Google+; and, occasionally, Hangouts messages sent from iOS aren’t being synced to Hangouts via Chrome.

Hangouts for iOS does have some nice touches, such as inline updates for people who have been added to a conversation, or in-app notifications for new messages in other Hangouts or at the bottom of a thread.

There are some initial issues with Hangouts (URLs, message sync with the Chrome extension) and I’d like to see options for controlling the default browser and copying single messages, but, overall, the service seems promising. The iOS app is a little rough around the edges, but I appreciate the notification options and the block feature. The ubiquity of the platform-agnostic service will certainly help in “hanging out” with people who don’t own a Mac or iOS device.